Whew!  The cat tower is DONE!  Well, all the wood and carpeting work is done, and I have the eyebolts in where I plan to hang the cat hammock and the toys.  Tonight I’m just posting the beginning and end photos, along with a summary of the process (cost, tools, etc).  I’ll be making several posts about how I transformed it in the very near future, as I have 93 photos that I took while making it.  🙂

The Beginning: An Ugly Old Dresser 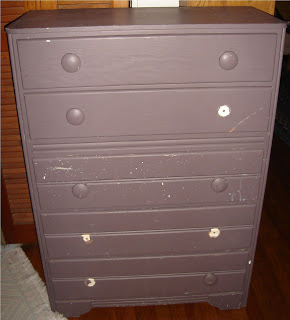 The dresser did actually have all the knobs on it – this was after I took a few of them off (I forgot to take a picture at the very beginning).

The End: An Awesome Cat Tower!!!

It took me most of May, but I made it!

New staplegun and staples: ~$5 for staples, plus ~$15 for the gun (gun not counted in price, as that’s a reusable tool)

Also, I used quite a few nails and wood scraps that I had around the house already.  Oh, and a couple leather scraps (but I own lots of leather scraps).  And 8 L-brackets we had in our random nails and brackets box – those were very useful, too.

Hours:  A lot.  Carpeting the thing alone was three sessions that were probably at least 3-4 hours long… I would say 25 hours would not be overestimating the time I put into this thing, and it could have been a whole lot more.  And if you count the waiting hours, it is much longer, as often I would glue something in place and then have to wait overnight before doing the next step.

Would I do it again?  Hmm… I’m not sure.  If the cat loves it, it definitely a lot cheaper than most cat towers out there for its complexity.  I sure hope the cat loves this thing.  But it did take a lot of time, and a lot of loud noise with power tools and hammering, and it made a huge mess every time I worked on it (I swept up a good pile of sawdust or carpet shavings after every session).  I’m glad I made it, definitely, but I’m not sure how soon I’d make it again.  Or maybe I’d make it a little differently next time.  It was a fun adventure, certainly, and one that I’m happy is (mostly) wrapped up!  I’m excited to share the photos of how this thing got transformed.