Heya, internet! This is the last big post about the cat tower. There will probably be a little update later when I add in toys and a hammock, but that will just be a couple photos. This post finishes up the major construction of the cat tower – adding all the carpet. 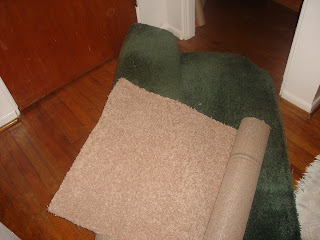 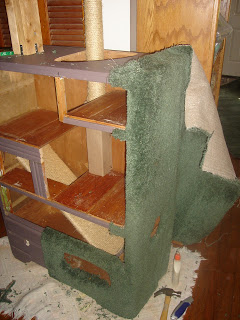 The first thing I did was carpet around the bulk of the outside of the tower. I used a staple gun, and wood glue around the edges. I used the hammer to nail down all the staples so that they were flat, feeling for them with my fingers until I was decently convinced that a cat’s claws wouldn’t catch on them. 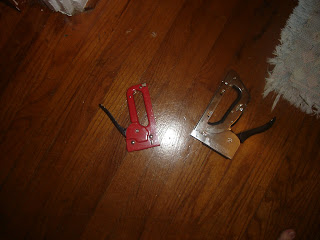 And then the staple gun broke! I believe something got squished in the area that the staples come out of, because the staples no longer moved smoothly at the front of the staple gun, and they often wouldn’t come out. Maybe at some point someone knowledgeable can figure out how to fix the staple gun, but I may have even made it worse by trying to fix it. So I went to the hardware store and bought another one (the silver one) – this time, one that was more heavy-duty and actually meant for carpeting, so it went a little quicker after that. But not that much quicker. Carpeting was slow, messy, and kind of a pain in the butt. 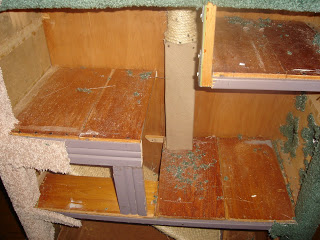 The picture above gives you an idea of how messy the carpeting was. The carpet remnants (especially the green one) had lots of sand in them, and it got everywhere. 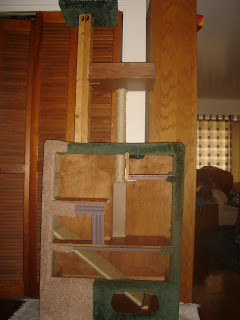 Around the sides and back is finished! I added the second color when I ran out of one piece of green – I like alternating, patchwork-y color schemes. And then I started from the top down! 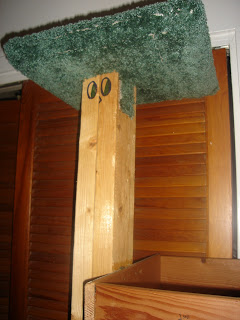 I added little bits to cover the bottoms of the L-brackets that hold the top shelf on, and decided that it looked like sideburns. So I added a face, haha. 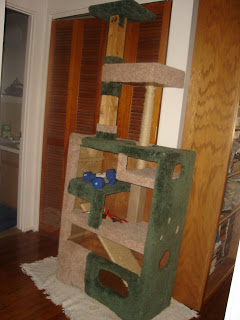 Here I’ve finished carpeting all of the horizontal surfaces except for the very bottom level. The weights are on the green shelf because the piece holding up the green shelf came unglued when I pounded the staples in. I added a bit more glue and weighed it down to secure it again. There are also clamps holding on the pieces that curve under the hole by the ramp. 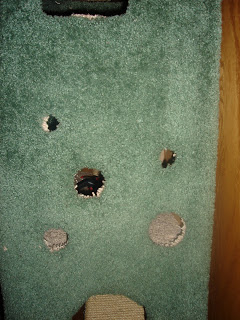 The side with the playing holes! I hope the kitty likes them – I think they look like fun! 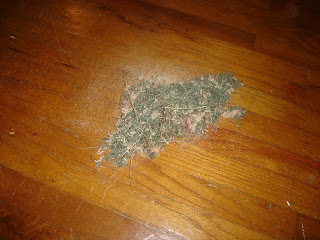 A fraction of the dirt and carpet pieces that came from one carpeting session (it took me 4 or 5 sessions on different days to finish carpeting, several hours each time). 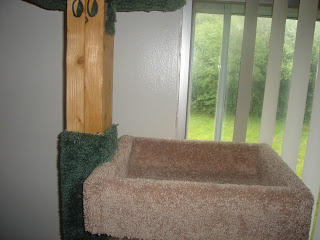 The top box, all nice and carpeted! 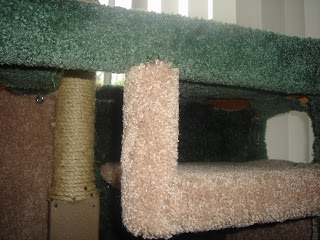 Top inner ledge! As you can see, I didn’t carpet every bit of the surface. I did carpet almost all of surfaces for the cat to rub against. This was also partly to cover rough areas, glue drippings and pencil marks, and bits of nail and staples that had peaked through some of the thinner surfaces. I don’t want the kitten hurting itself, so I had to cover most of the surfaces. 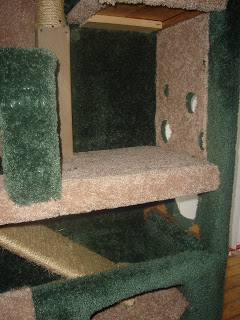 Inside of the bottom right-hand side. 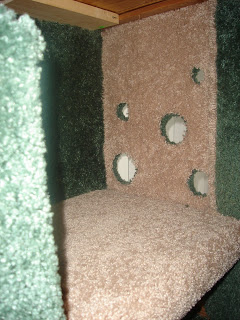 Inside of the playing holes. 🙂 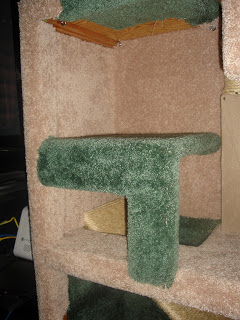 Green ledge and top of ramp. You can also see the eyebolts in the ceiling here – there are four of them, as a cat hammock will be hung from the ceiling above this ledge! 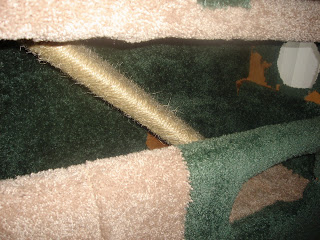 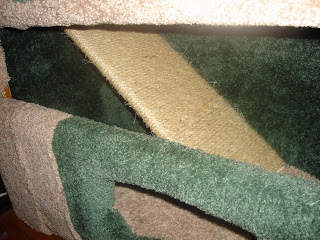 Tada! I have to add the hammock in, and there are two eyebolts in the bottom of the top ledge and the box that will hold dangling toys for the kitten to play with. So I just need to whip those up and add them, and it’s all finished. It’s been a lot of fun looking at the cat tower the past week – I’m really proud of it. It’s not perfect, but I think it’s still really cool. I definitely saved a decent amount of money compared to buying something this complex new in the store, and I made it mostly out of remnants/old materials. I also like not adding to the massive amount of things we consume in our culture (many of which end up in landfills over time), and doing my part to re-use old things into new, neat things. 🙂