I went up to Ionia on Wednesday to visit DeForest’s family and see the kittens!  I’m getting a kitten in about a month now, and I wanted to check them out and choose one from the litter.  I’ve never had a pet that I’ve taken care of before!  (Mom always took care of the dog.)  I’m alternatively really excited and really nervous.  The kittens were so tiny! 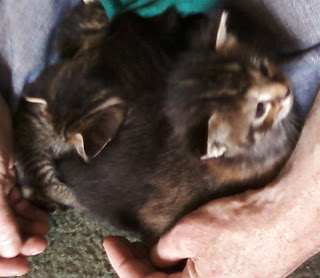 Four of the kittens snuggling in DeForest’s lap.

Unfortunately, they didn’t have much of a personality yet, but I did narrow it down to picking one of the two tiger-striped kittens.  How did I make this important decision?  Because I thought their faces were cuter than the black kitten’s face (it had a very narrow face), haha. 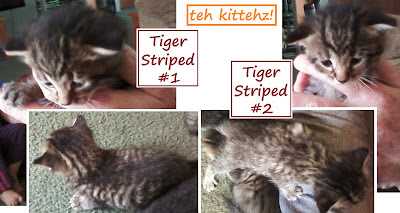 Aren’t they super adorable?  Aw, yay.  I’ll be getting one of them.

DeForest’s father’s hobby is going to auctions/estate sales and getting things to re-sell at flea markets and such.  He has a decent-sized little warehouse full of shelves of random things, and apparently likes to get rid of stuff and give to his family, because he let me loose inside of it and kept trying to get me to take more and more things, all for free!  He was so sweet.  It’s a good thing that DeForest told me that I could say “no” to his dad as many times as I wanted to and he wouldn’t be offended, or else I would have ended up with a bunch of stuff I didn’t want.  As it was, I found a lot of really neat things!  Here’s my day’s loot: 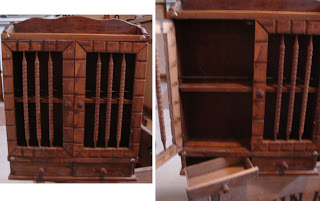 This cabinet was originally a spice rack, but I have twice as many spices as would fit on it.  I suspected that would be the case when I picked it out, but it was so nifty that I wanted to take it anyway!  I’m going to use it as a thread rack instead.  I’ll post pictures once I get it cleaned and on the wall holding my thread.  🙂 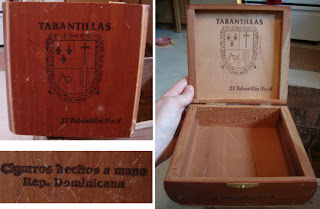 This cigar box had me looking at it because of the cool heraldry on the front (I’ll have to take it to our SCA herald and ask her what the symbols could mean), and the wonderful smell cinched the deal – it’s made of cedar!  I haven’t decided what it will hold yet, but whatever it is will slowly start to smell of cedar, which is lovely. 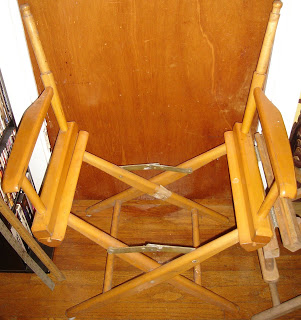 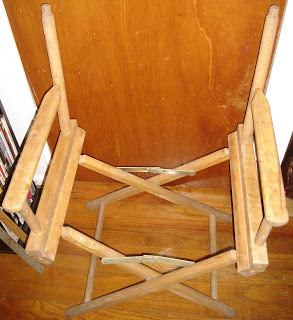 These are two director’s chairs.  The fabric for the bottoms we actually have, but I had already slid them out and put them in the hamper to be washed.  They are amazingly sturdy and comfortable chairs.  All I need to do is whip up some quick back covers, and maybe a carrying strap, and they will be awesome camping chairs. 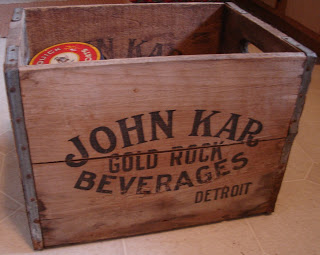 I love how this box says Detroit on it (I live 45 minutes from Detroit), how it doesn’t mention the word “beer” (though undoubtedly this is referencing a beer…), and how it has handles!  It’s really sturdy, and after a quick rubdown to get rid of the dust will be great at holding something neat. 🙂 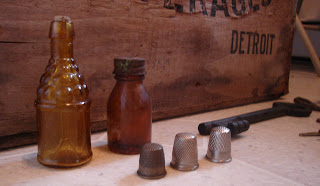 Two little bottles!  I hope to clean these up and end up making some sort of steampunk bandolier to hold them as potions.  I’ll probably end up putting water dyed with food coloring in them to make them look awesome.  I also don’t own any thimbles, and there was a pile of them there!  I found three that fit my first two fingers and took them with me.  Sometimes handsewing (especially of leather) will hurt my fingers – these will hopefully solve that problem. 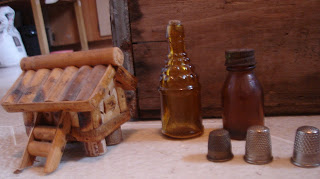 The little house will be going into my snow village.  🙂 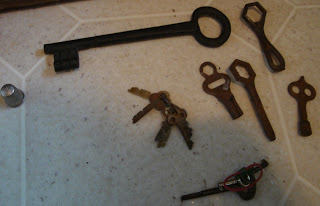 Keys and things!  These will also most likely end up in something steampunky. 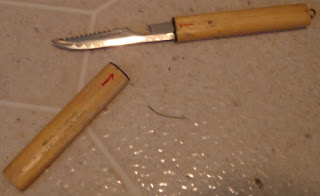 A fishing knife?  DeForest’s father thought this was a fishing knife, because those ridges on the back are perhaps made for de-scaling fish.  It also has a bottle opener.  I thought it was neat, especially with its nice wooden sheath. 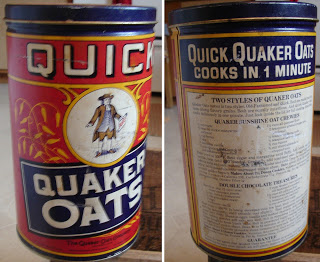 One of my favorite items from the day!  I never thought I would walk out with an old tin (generally I don’t care about those types of things), but this one just caught my eye.  I use Quaker Oats all the time!   Once I get my butt in gear and make more granola, it will be going in this tin and sitting proudly on my counter.  It’s in really good condition, and the inside was really clean (though I will of course wash it before I use it).

A metal yard stick and a thick wooden meter stick!  The metal yard stick is from St. James, Minnesota, and the meter stick from Welch Scientific Company out of Chicago, Illinois.  I would have picked them up regardless of where they were from, because yard sticks are SO USEFUL and I don’t have any, but they are also from the Midwest near where I grew up.  Yay.

So, that was my day.  5 hours of driving round trip to go up to Ionia.  We also got to see DeForest’s sister, brother-in-law, and their three children, and that is always a treat.  I had a lot of fun tipping baby Ava upside down and seeing her smile over and over again.  Baby smiles really are something else, aren’t they?