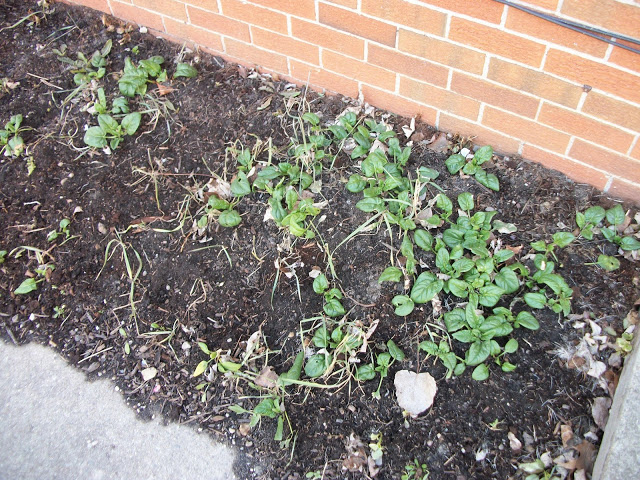 My garden gets me ridiculously excited on a regular basis.  I just have to share how awesome this is!  These first two pictures are from a couple months ago, right after the snow melted.  The spinach plants from last fall survived the winter! 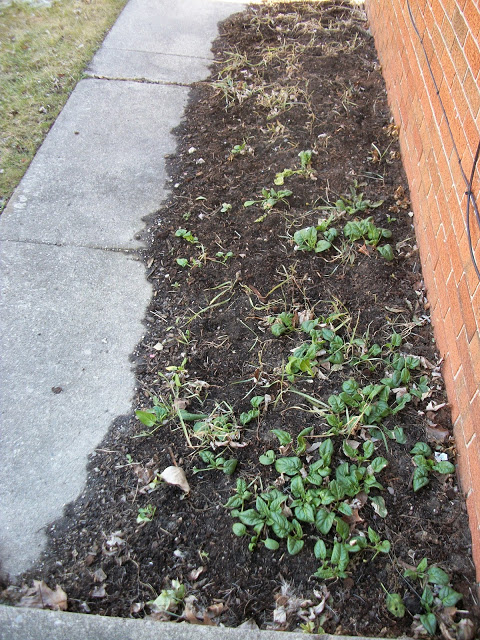 Now contrast that to what those spinach plants look like now.  I had no idea spinach could get so big!  I also finally added the chicken wire on this part of the garden, and opened up the corner plot so the garden could just wrap around the corner of the house in one big piece. 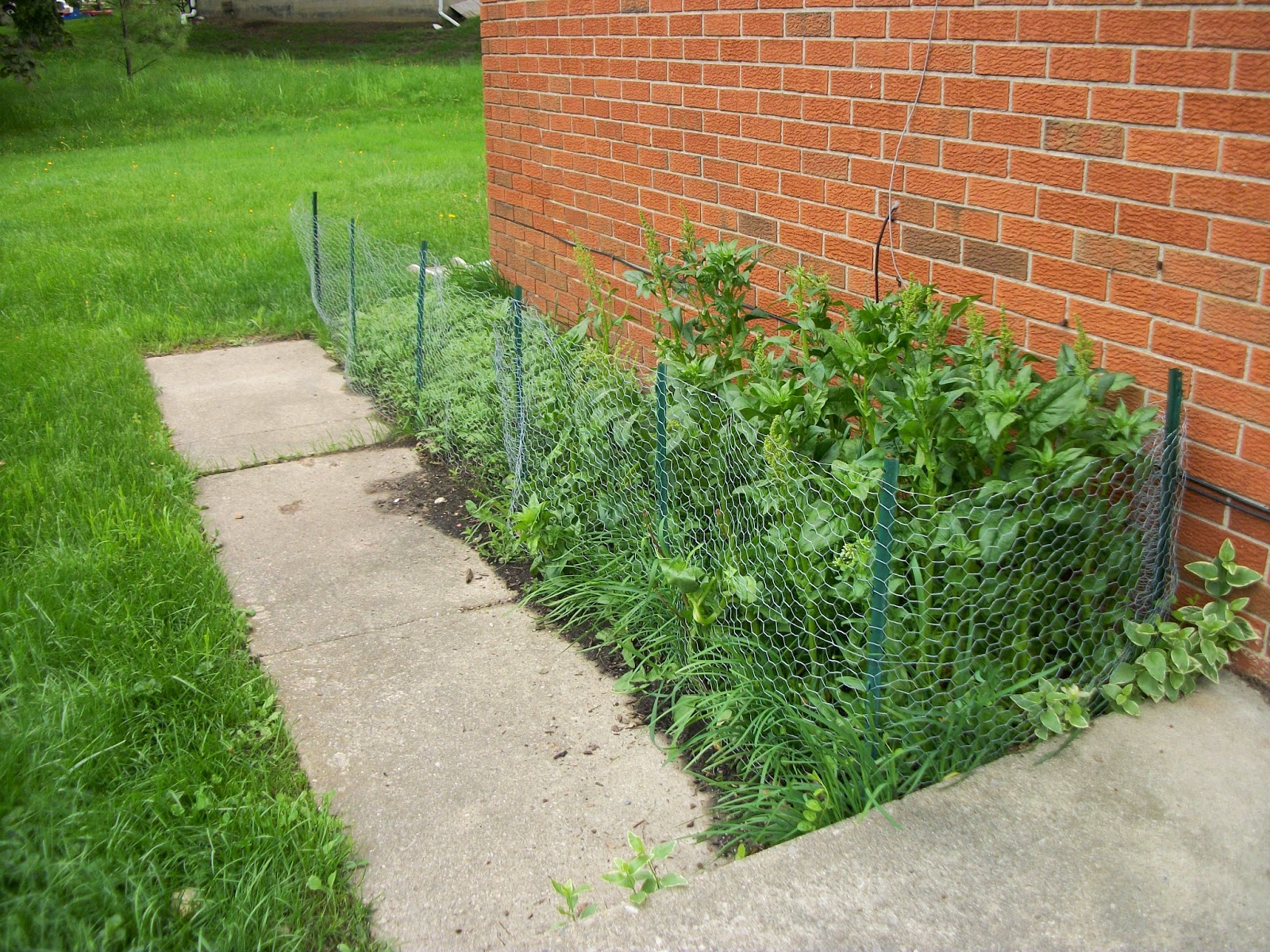 Holy spinach, Batman!  I eat a large salad off these plants every couple days, and they are still this huge.  They just keep getting taller!  And I have both male and female plants, so I’m going to get seeds this year!  *excitement*  Self-perpetuating wonderfulness! 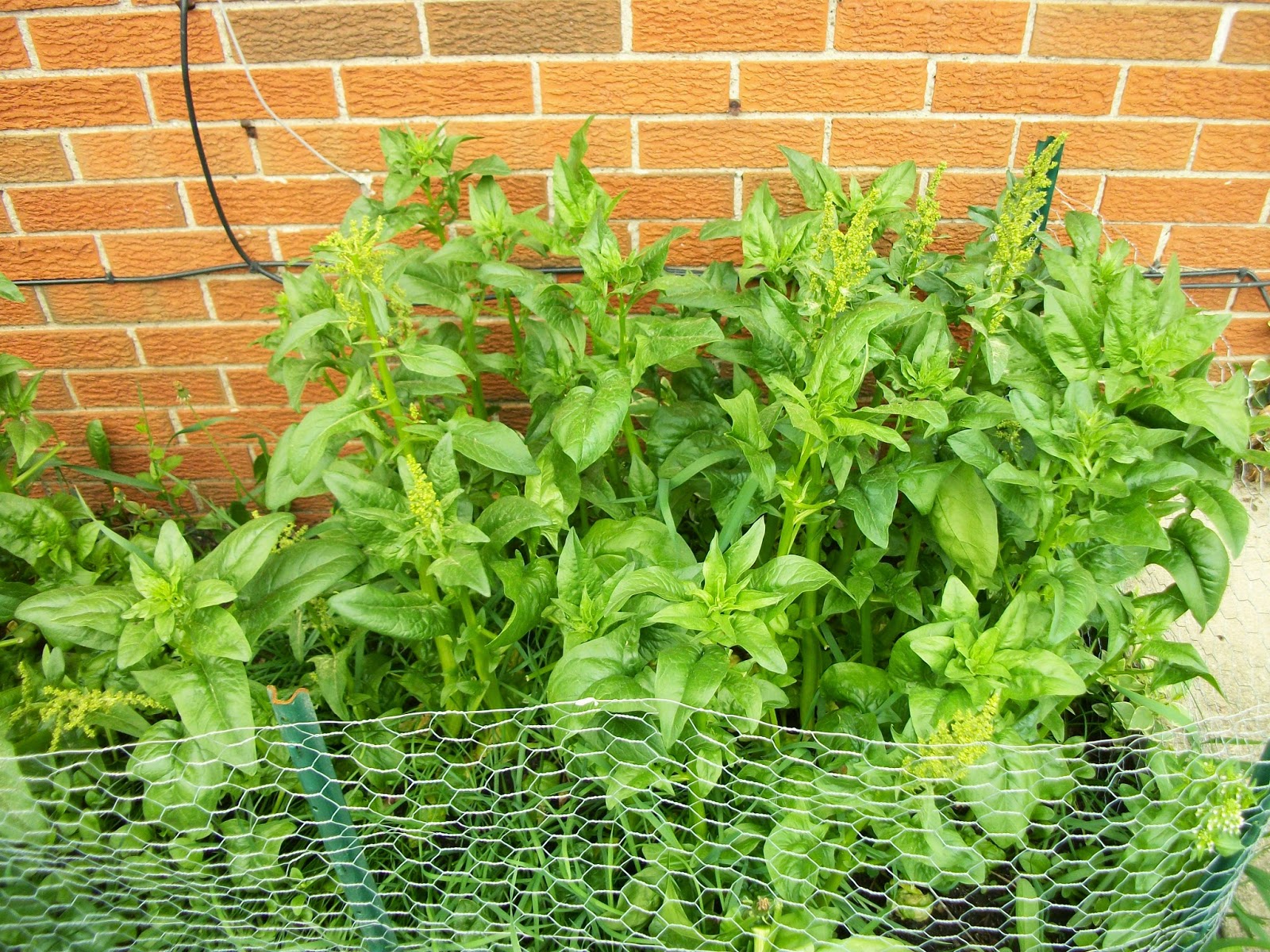 LOOK AT ALL THE BABY KALE!  *coos*  I’m going to make you into so many tasty soups… 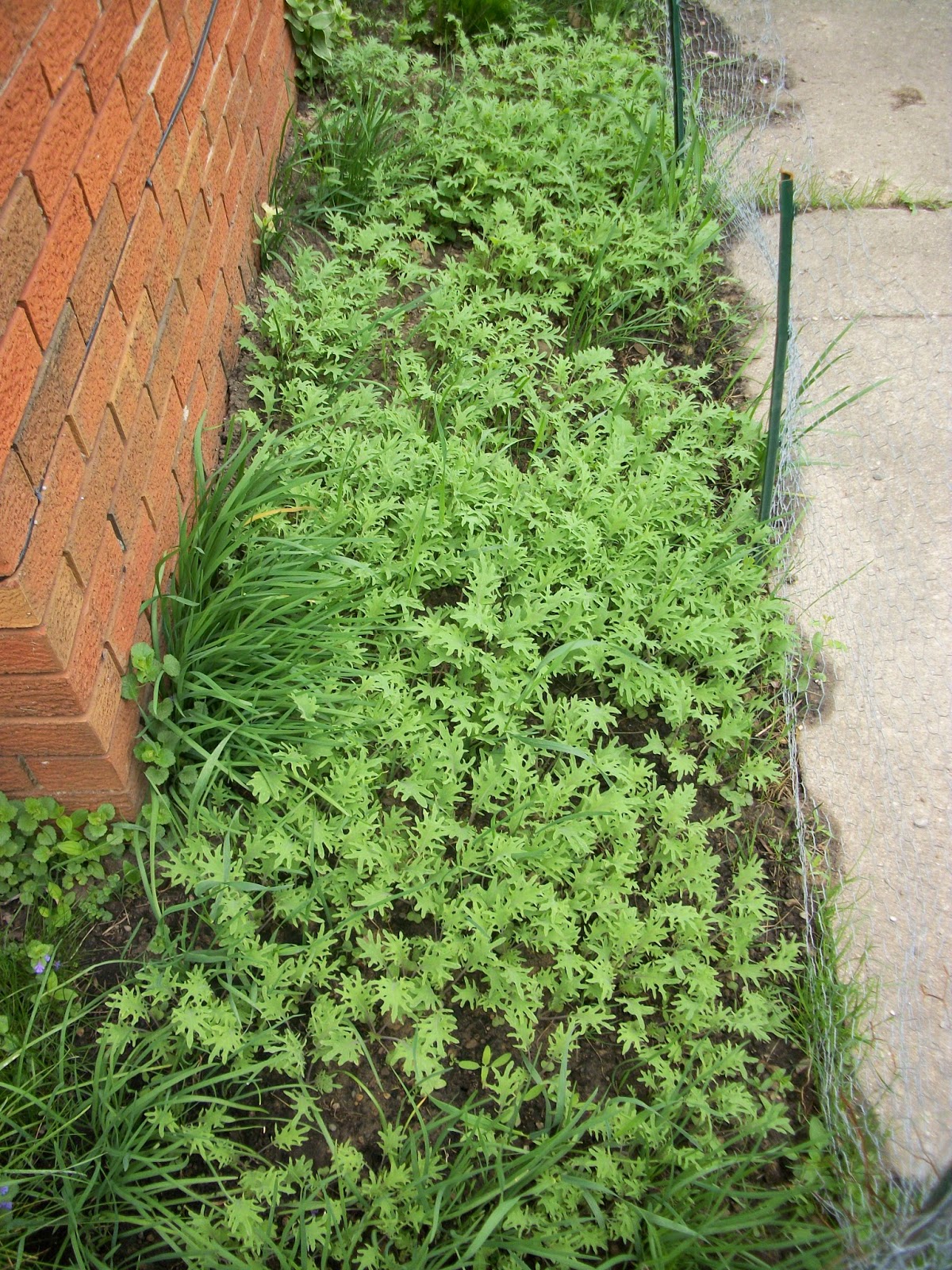 The garden wraps around the back of the house (where it originally started last year – I added the side garden last fall). 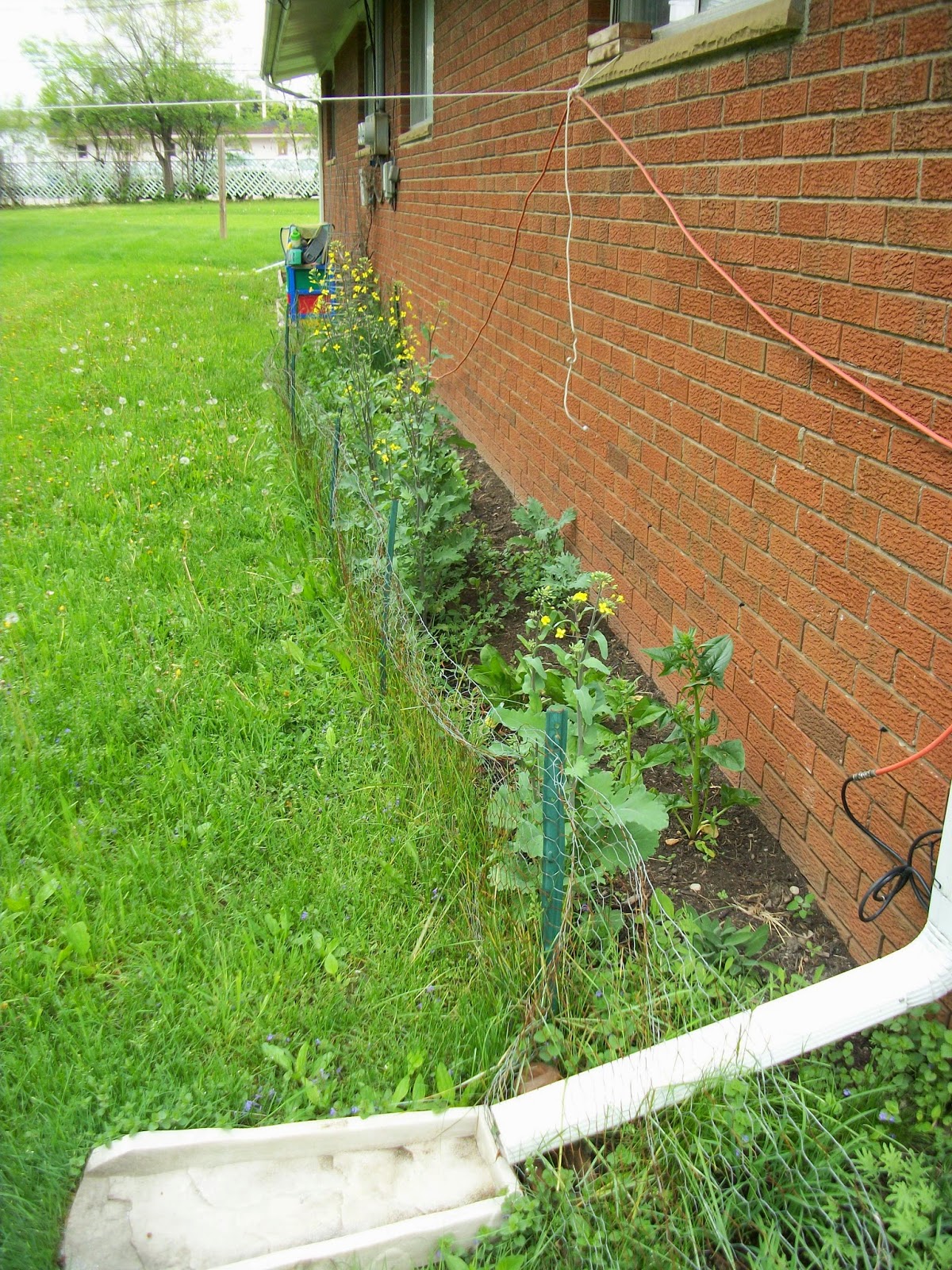 A couple more spinach plants from last year!  And some kale that also started growing immediately when the snow melted.  You can’t see it, but there’s a bunch of sage plants growing behind the kale. 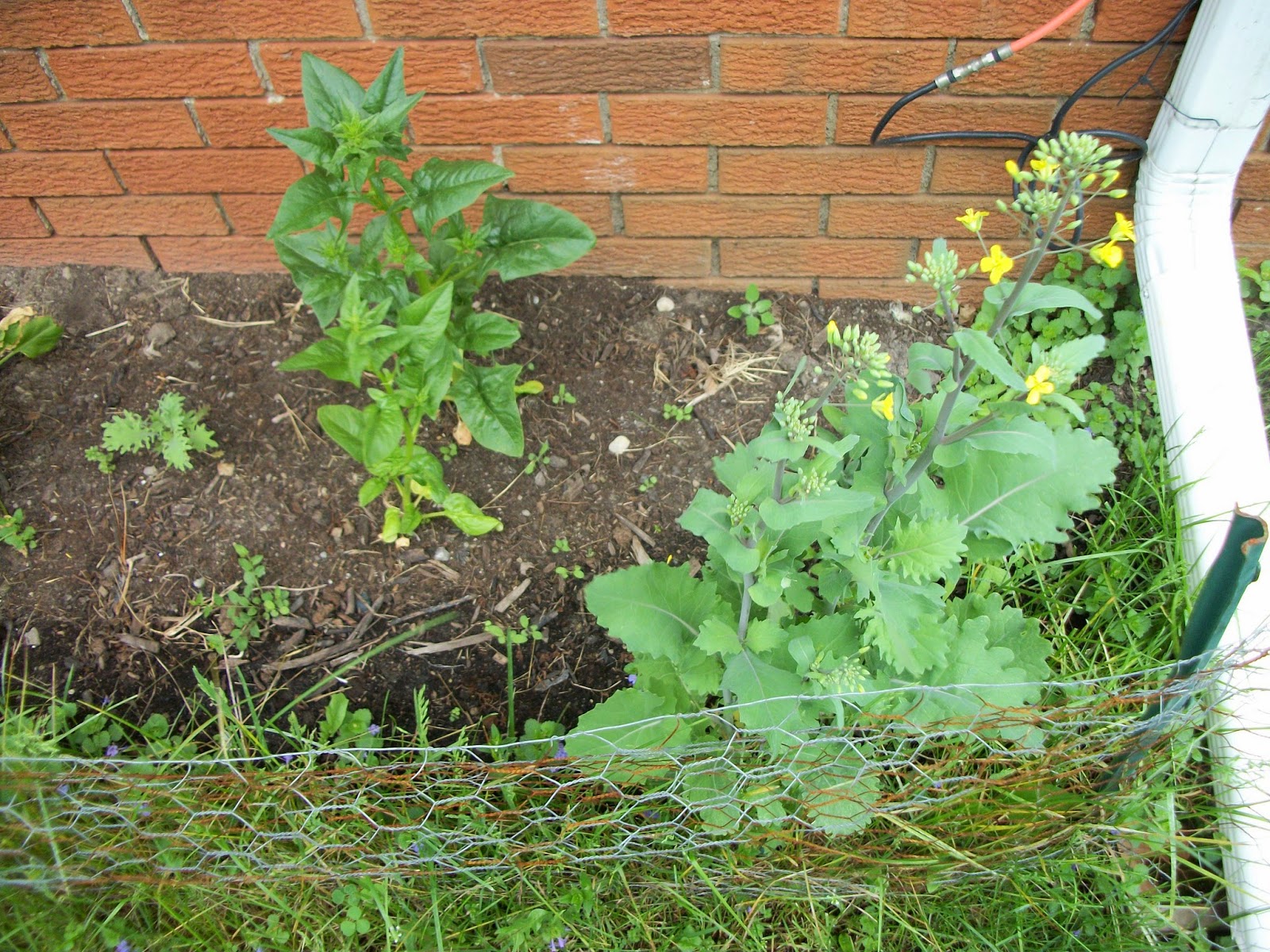 These handful of kale plants were from last year, and now they are flowering!  More seeds to perpetuate the garden next year!!!  =D 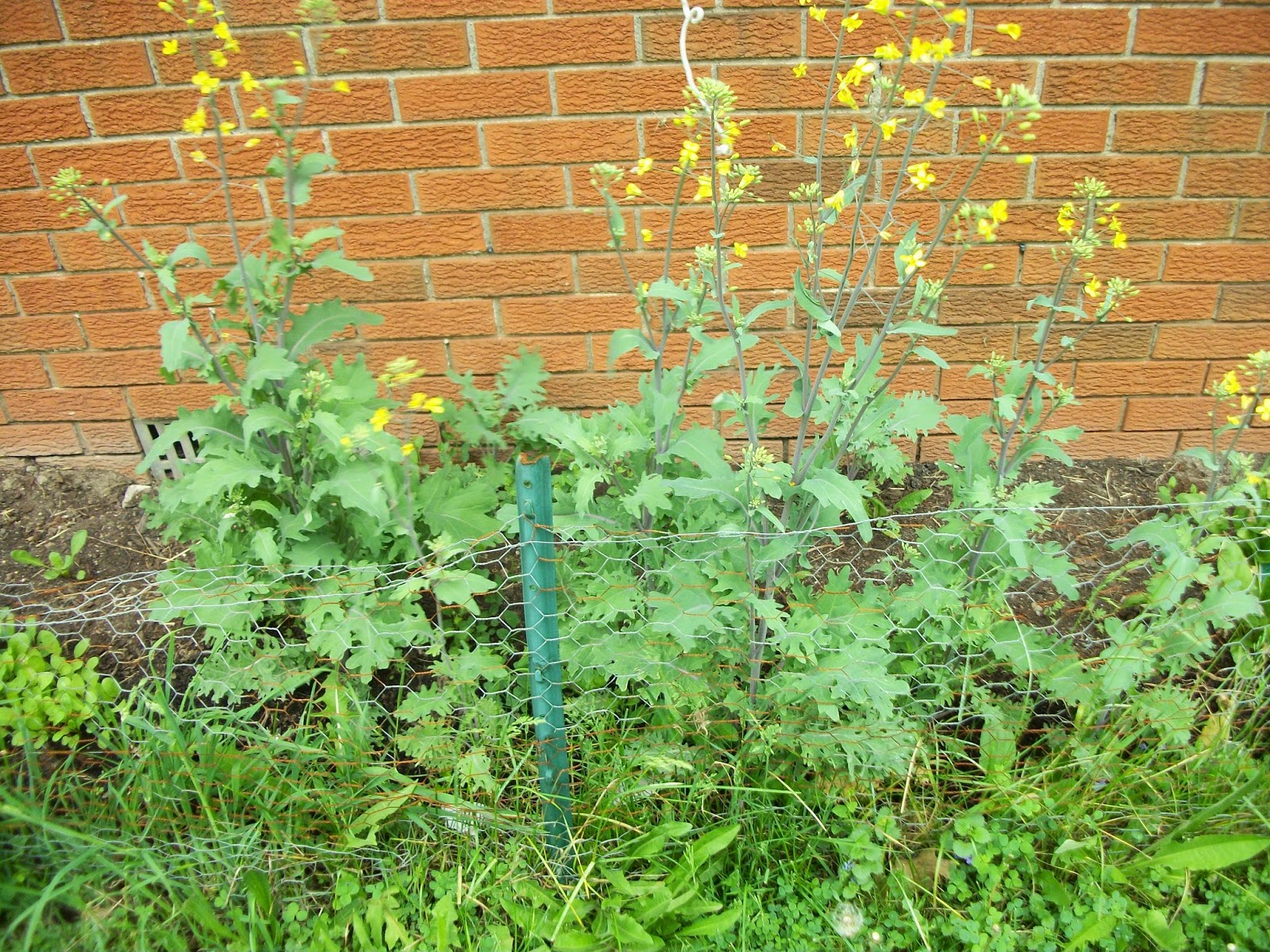 A bunch of arugula on the right, and some more spinach… When I planted this spinach, I had no idea the other ones would get SO HUGE.  Not sure I need these other spinach plants now… perhaps I’ll plants more arugula than spinach next time.  We’ll see how they grow throughout the summer!  There’s also parsley up against the chicken wire. 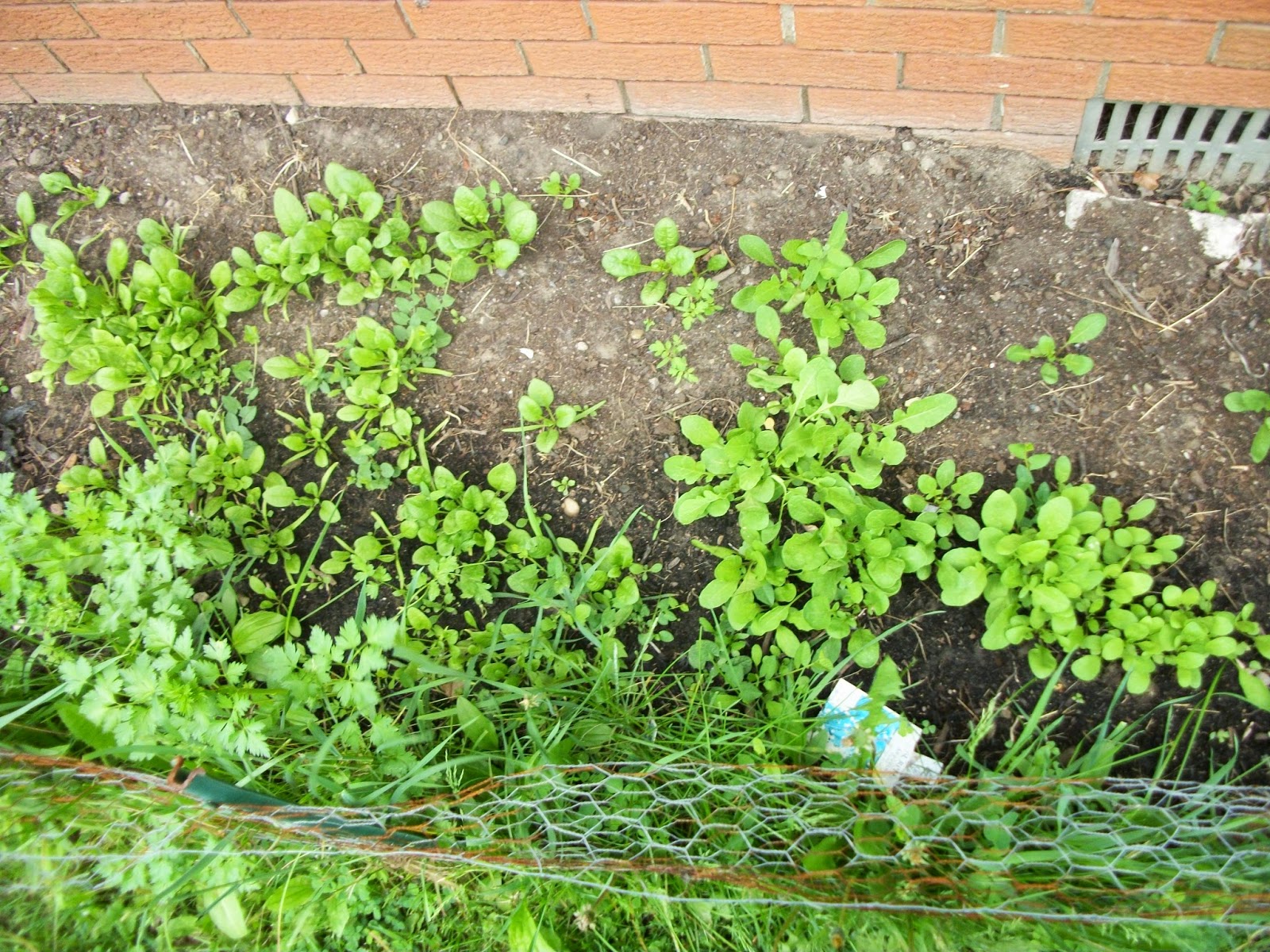 More spinach, along with rosemary, horseradish, and thyme. 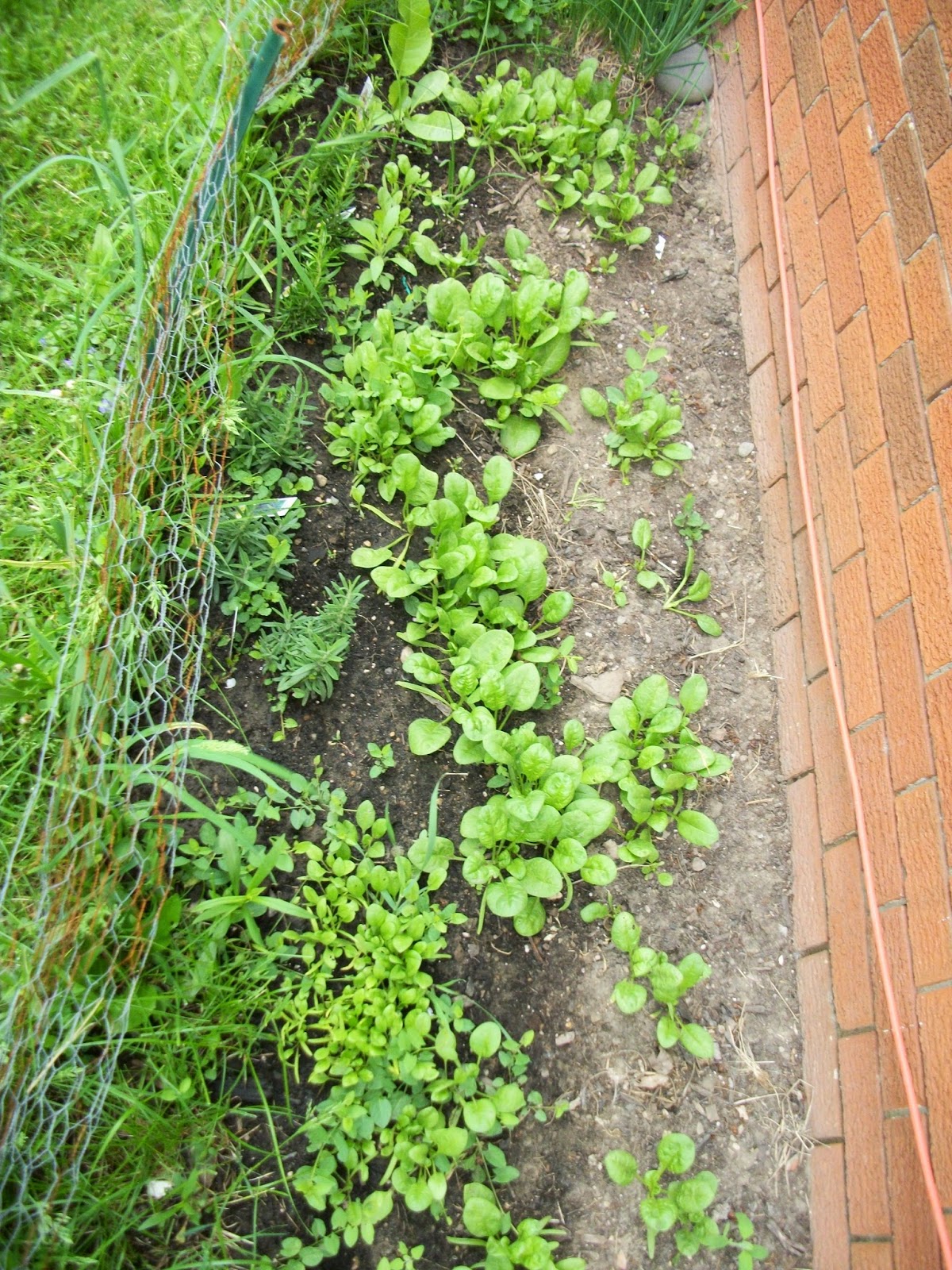 Mmmm, rosemary… can’t wait for these plants to get a little bigger, so I can start cooking with them.  This area will also be home to all the tomato plants.  I will hopefully be planting those within the next week or two, in and around the spinach.  I’m told the spinach plants will die off in the middle of the summer, when the tomato plants are starting to get larger. 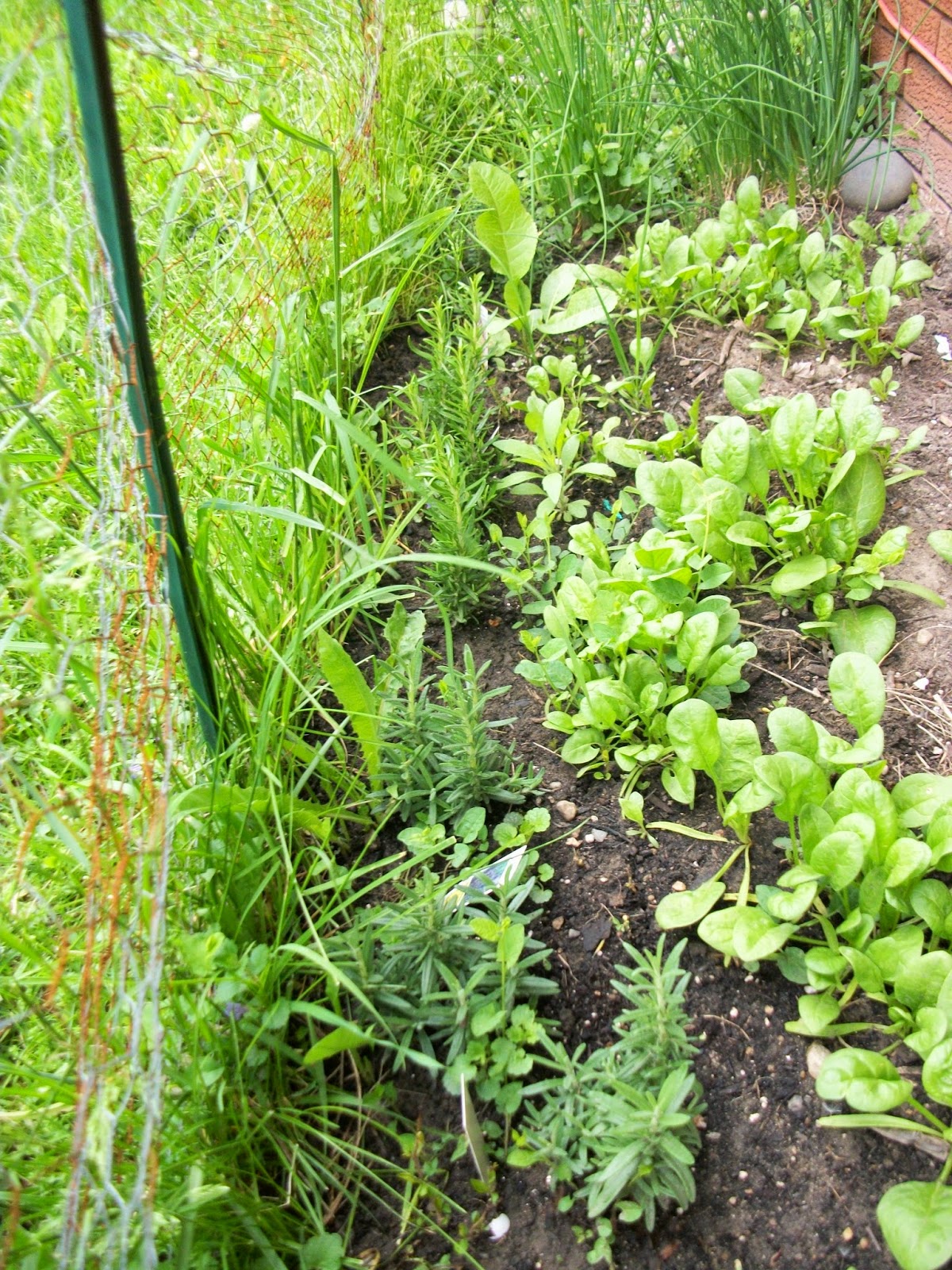 Chives!  I never really understood chives.  While tasty, onions just seemed better.  Then I put them in a salad with the spinach, and it’s wonderful!  Fresh spinach and chives, with roasted beets, olive oil, and balsamic vinegar… that’s been about 1/4 of my meals the last few weeks.  Yum yum!

And yes, that’s a bunch of weeds around the chives.  Whatever.  The food is growing, and I know what’s what, so I don’t worry a ton about weeding – I just do a bit now and then, when I feel like it or when they are getting too close to the plants I care about. 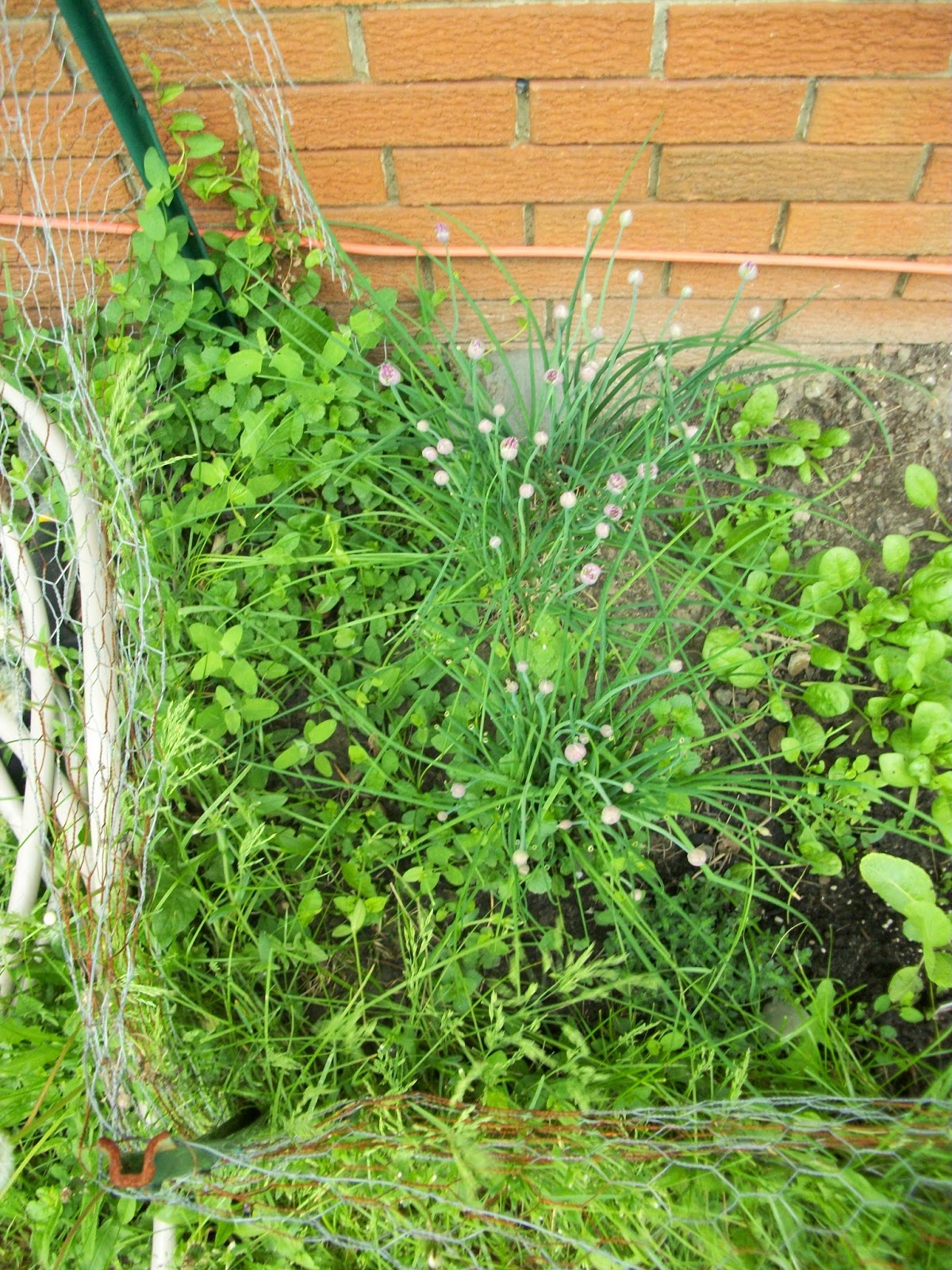 Growing my own food just makes me happy.  It’s so easy, too!  I put 10-20 minutes of work into the garden, twice a week (watering it and pulling a couple weeds).  Really low-maintenance, and delicious!  I adore being able to walk around my house and pick my food to eat, right then.  And watching the plants explode with growth every few days is fun!  ~Kell