I got a gorgeous dress many years ago in Mexico.  It’s a sort of infinity dress, where I can re-tie the neckline in several different ways.  There is one problem with the dress: the cut of the dress makes wearing a bra with it very difficult, and the dress is too thin to wear without one.  For a couple years, I would wear a strapless bra, and then safety pin the back of the dress to the bra.  When that bra wore out, I kept the dress, thinking I would figure out a way to make it work.*  I finally fixed the problem a few weeks ago, by adding a simple lining to the top of the dress.

Here is the original dress, knotted in pretty much the only way I wear the dress.  As you can see, the lack of straps and low cut of the back makes it hard to wear a bra with this. 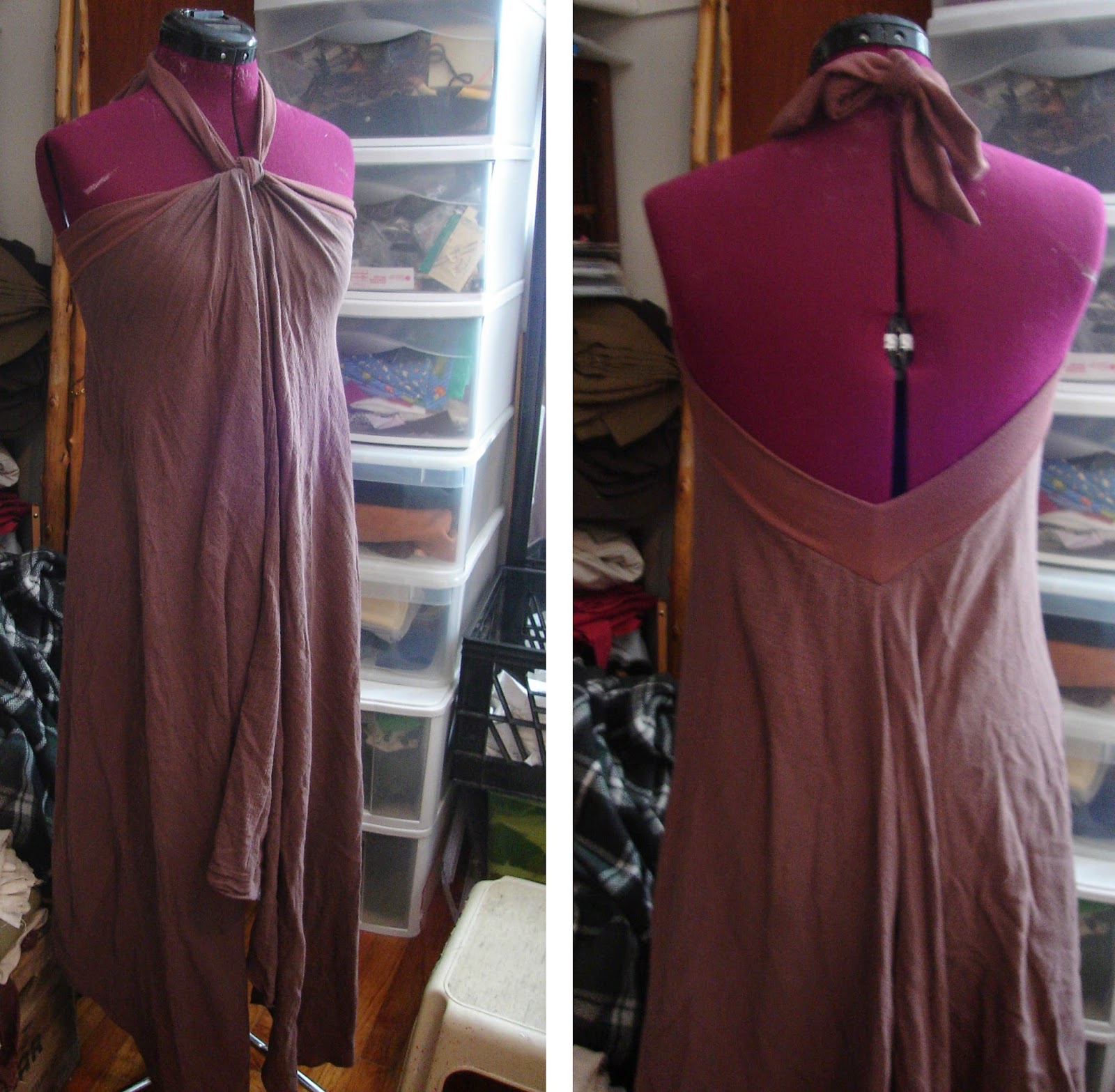 First, I opened up the top and then I pinned it roughly in place where the knot usually is tied. 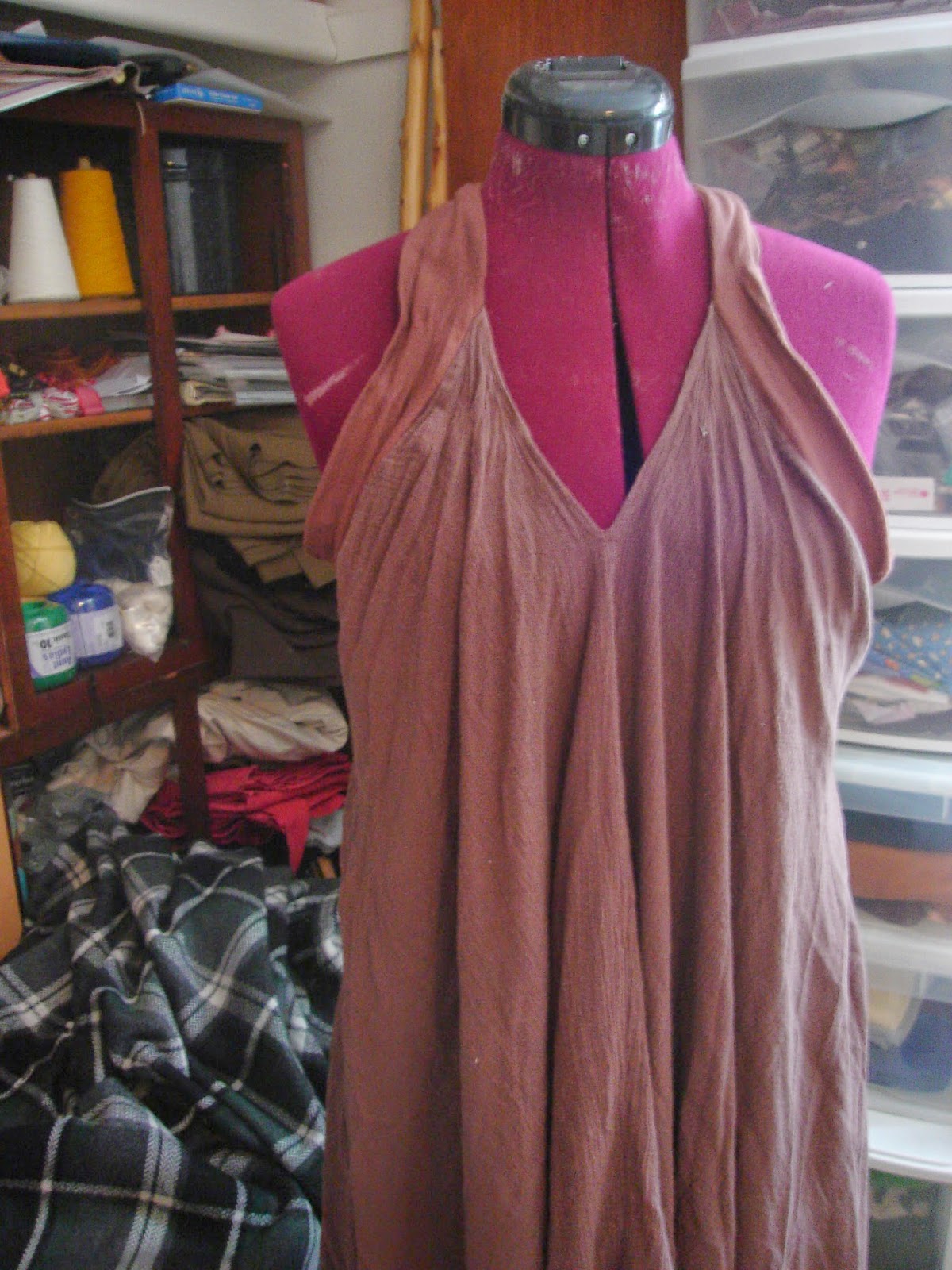 I then marked all the way around the top of the dress with pins, and removed the dress from the dress form (how many more times can I say dress in one sentence?).

I measured around the line from the front to the center back, to get a rough idea of how much fabric to cut. 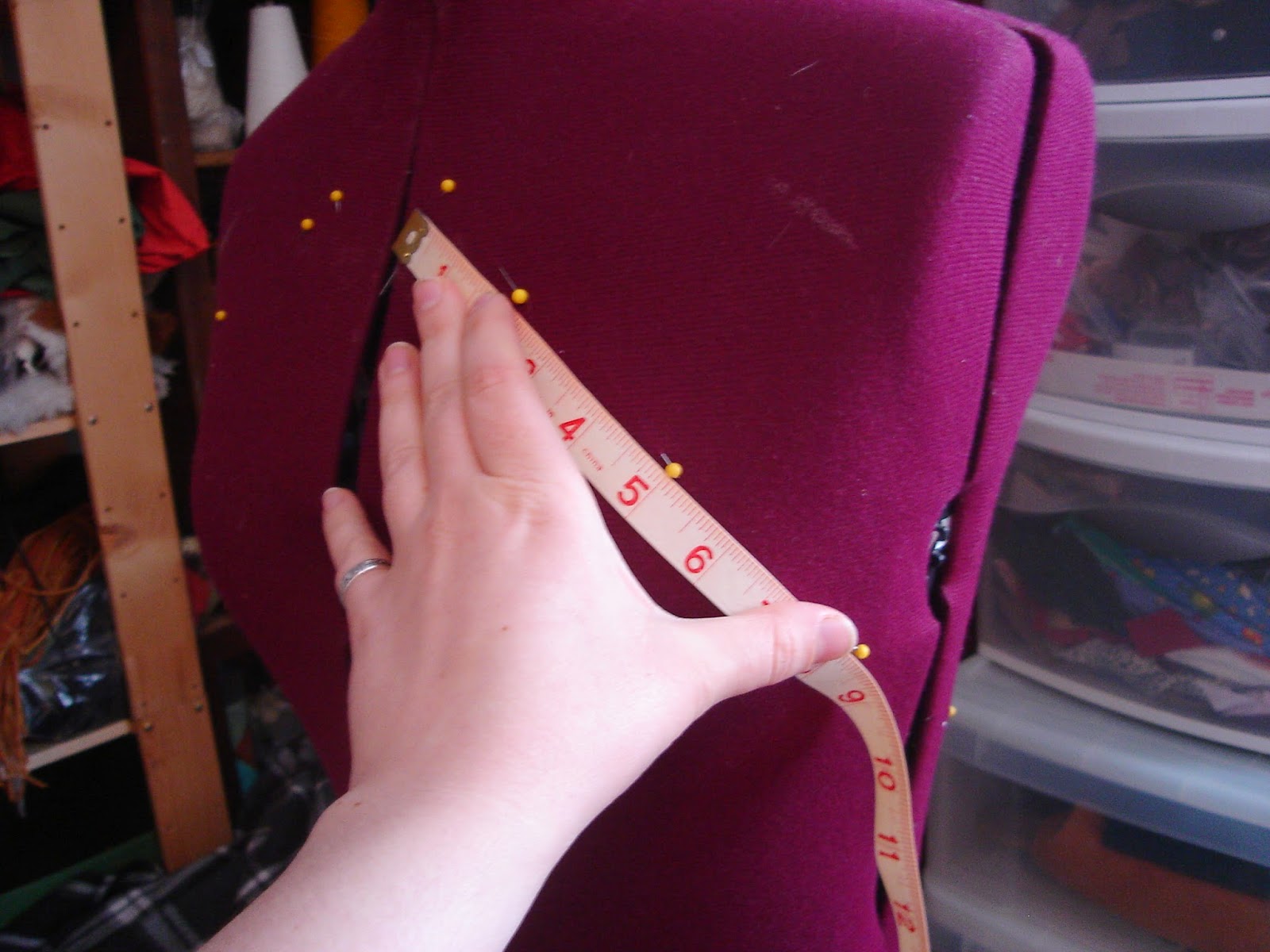 I took two pieces of a thick brown knit fabric that were long enough, and pinned them to the dress form along the lines.  Then I pinned the front and back where I might sew them. 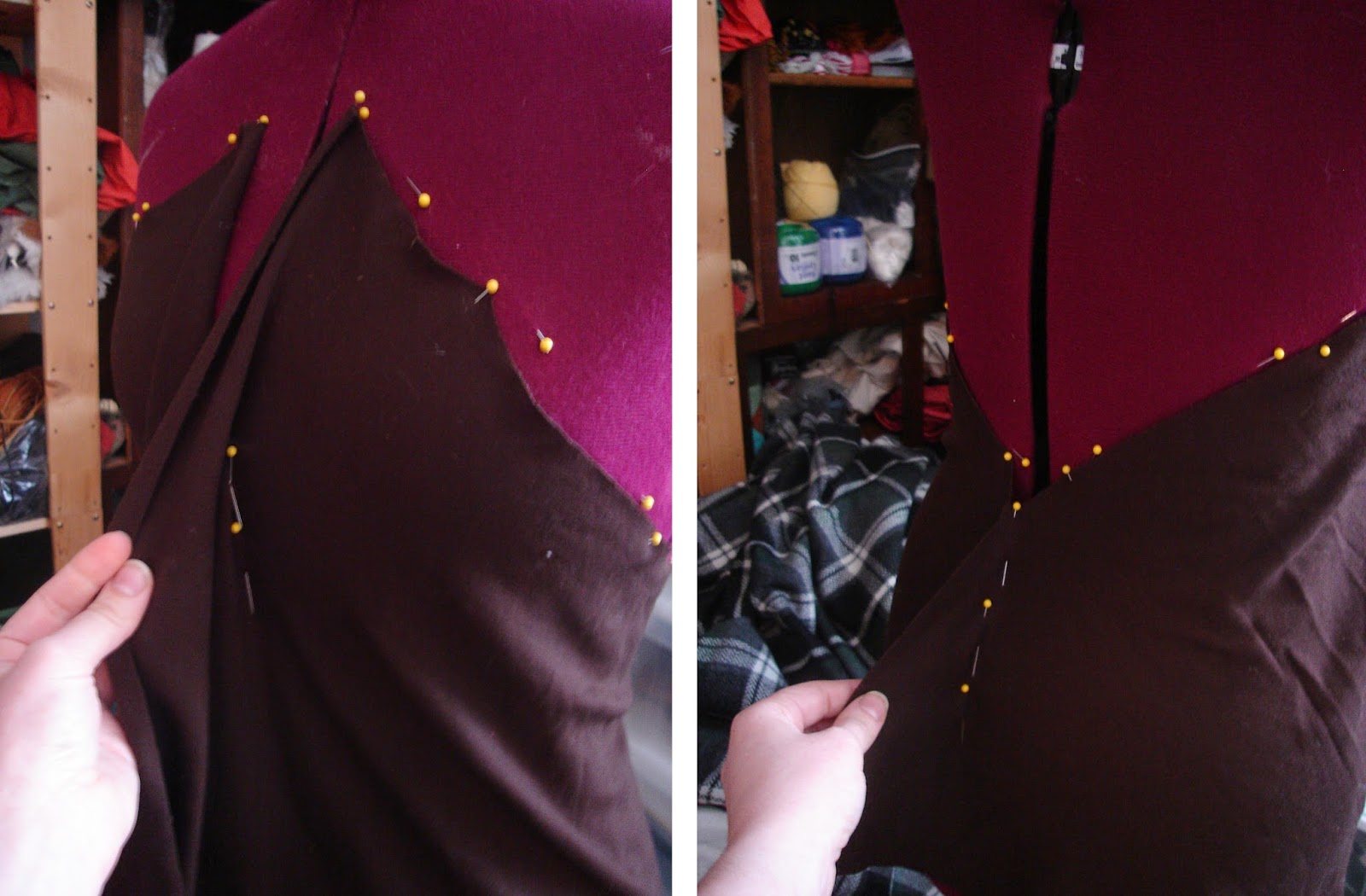 Since I knew the back piece would be sewn (but was uncertain how the front would come together underneath the keyhole neckline), I sewed that seam first, then paused to try it on the dress.  After it was pinned, I cut off a bunch of the fabric so that it would hang how I wanted it to (the extra fabric was heavy and pulling on it).  I just roughly cut it so it was the same length all the way around – enough length to cover my chest, essentially. 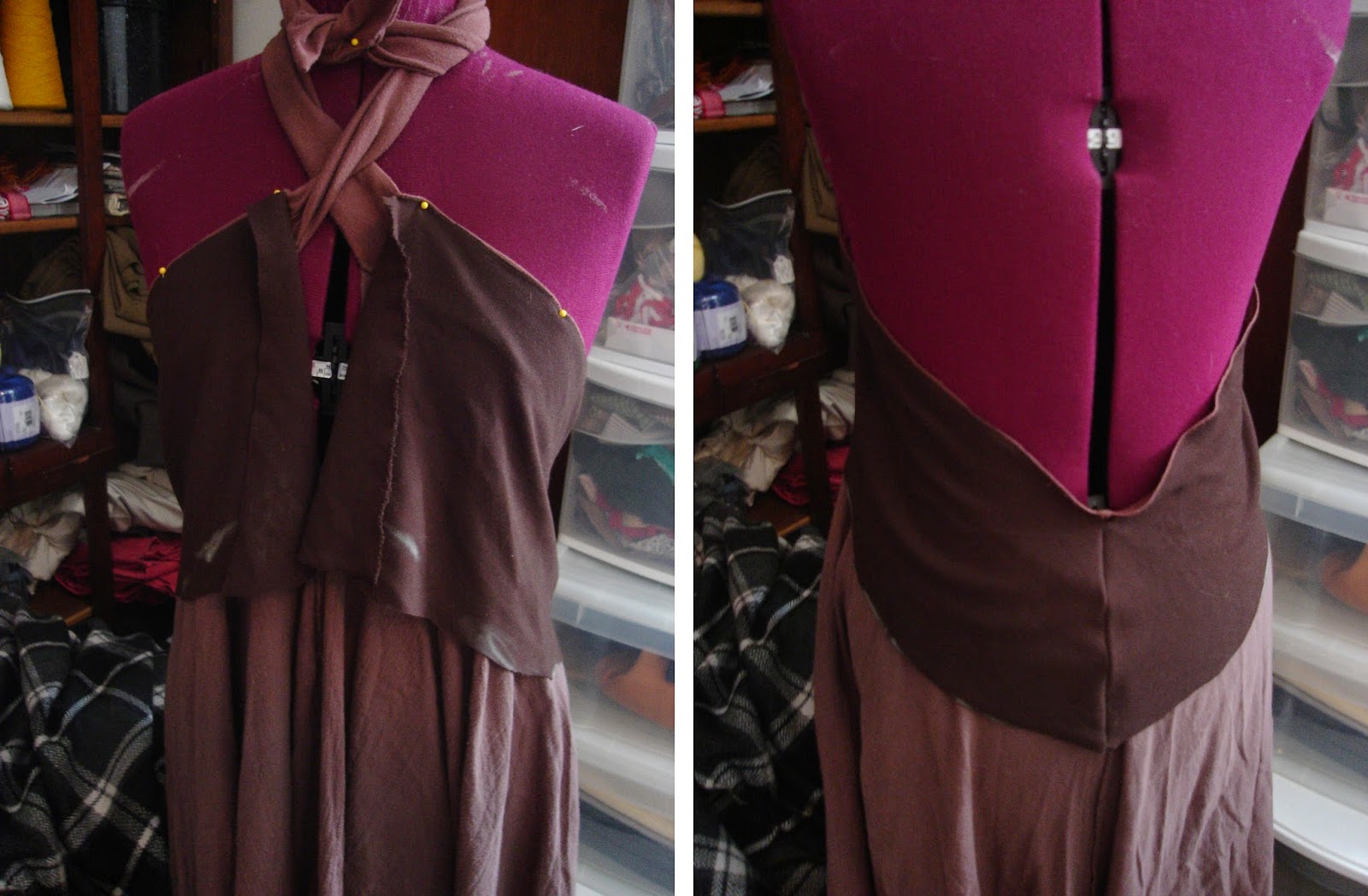 I sewed it with a simple zigzag stitch along the top of the dress.  Then I tried the dress on, and the top was warping under the weight of the knit, so I added a straight stitch along the bottom of the dress’s neckband.  That stabilized it enough that it lies nice and flat again! The picture below shows how my stitches weren’t exactly straight, but it’s hard to tell unless you get really close. 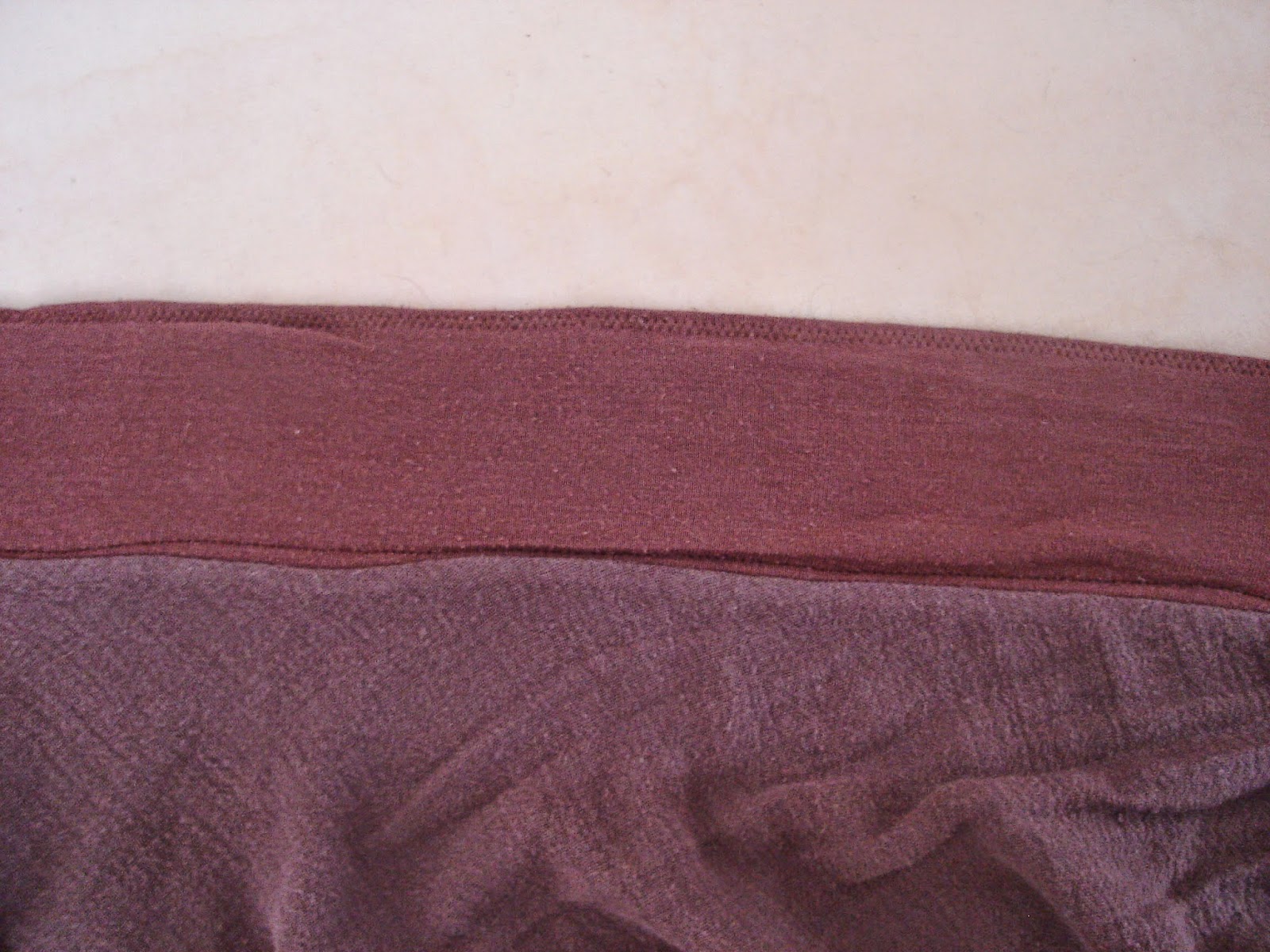 I forgot to take a picture, but I did end up finishing the front by sewing it to the edge of the keyhole neckline, with a short seam straight down below that, where the fabric naturally wanted to go. 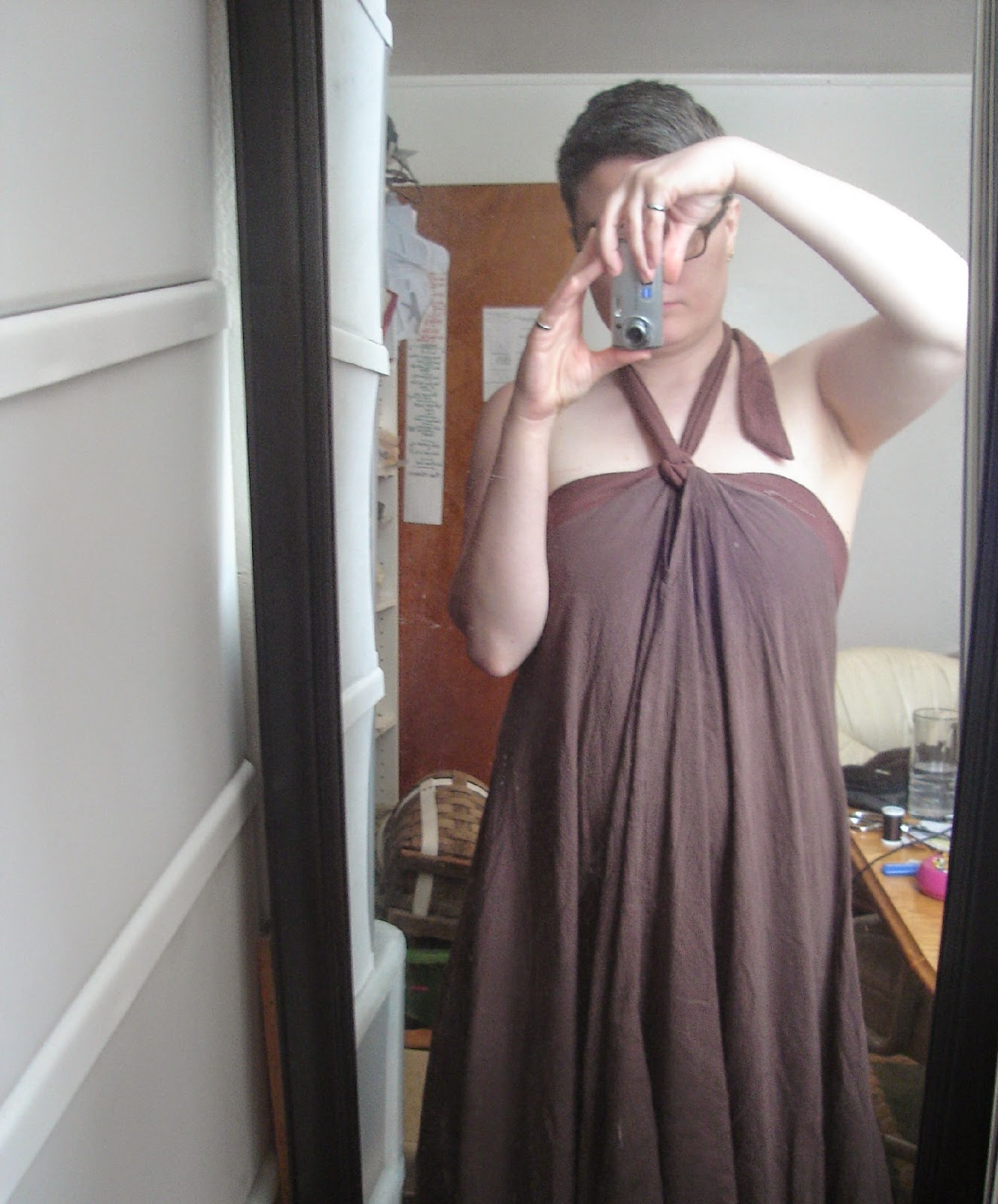 Voila!  I can wear my dress again!  I’ve already gotten many compliments on it in the last few weeks.  It’s wonderful.  The heavy knit fabric has just enough stretch that it lightly hugs my body so the dress can flow around it, and adds the lining necessary to avoid social bra-less faux pas.  Yay!  ~Kell

*You totally read that in Tim Gunn’s voice, right?