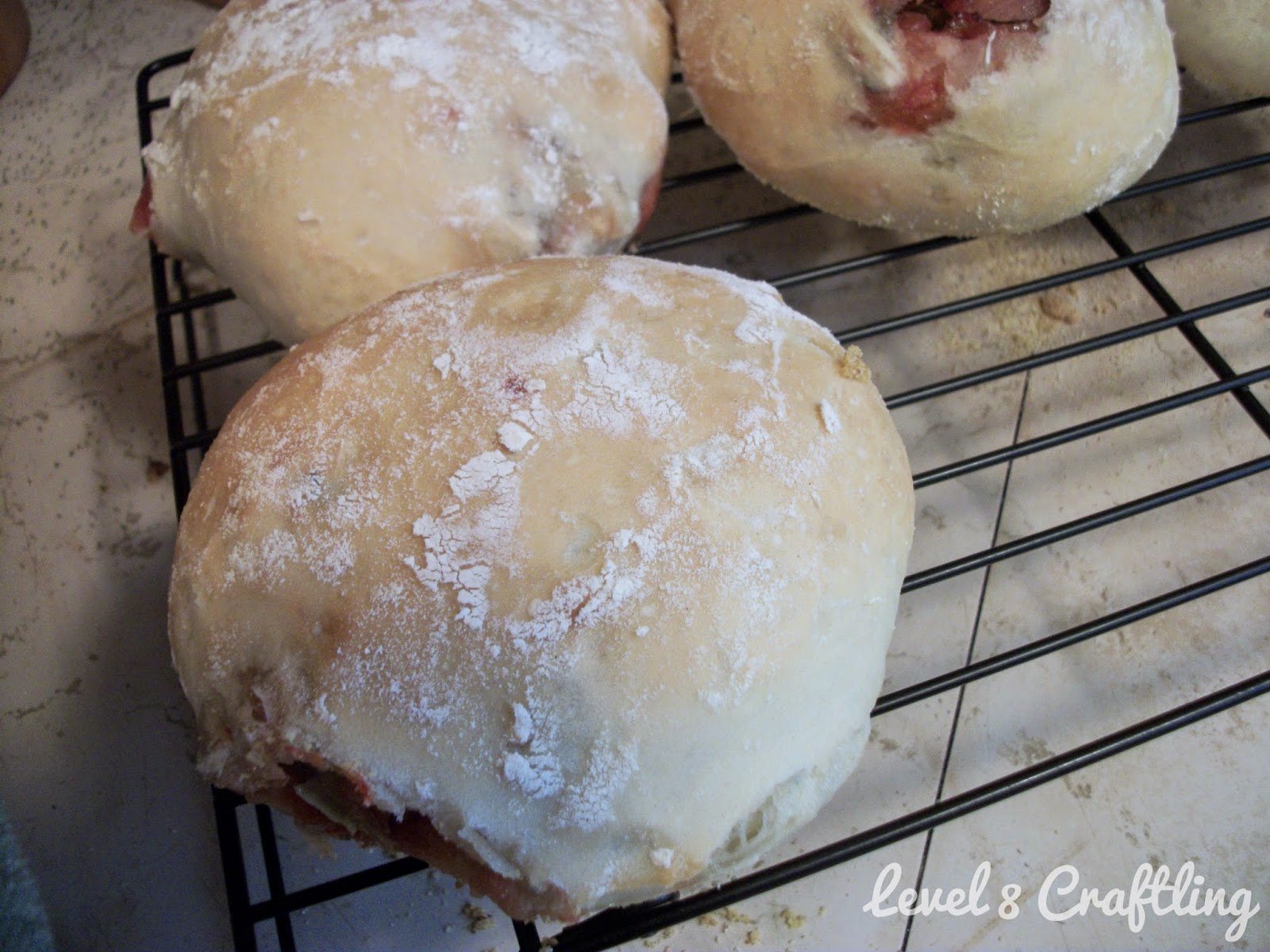 In most fantasy novels that I read, there seems to be this market stall food called sausage rolls or meatrolls, that protagonists grab before journeying off on their quests.  I have been salivating over this concept as long as I’ve read about it, and a few years ago I decided I was going to make one.  I knew how to cook sausage, and I knew how to make bread dough – that’s all I needed.  I call it Meal in a Bun.

Meal in a buns are amazing.  They take a few steps to make, but I always make a lot of them at once and then freeze most of them for meals later.  They freeze and thaw beautifully, heat up very quickly in the microwave, and are easy to grab and bring with you. Wrap them up tight and warm in the morning, and eat them in the middle of your convention day or SCA day-trip.  They are healthy, made entirely with whole ingredients, and don’t look out of place at fantasy or medieval events.

The first step is to make the bread dough and the stuff for the insides.

2-3 recipes of the master recipe found in Artisan Bread in 5 Minutes a Day, or whatever your favorite bread recipe is.

Lately, I’ve been making a mixture of roasted root veggies and sauteed sausage and onions to stuff into my meal in a buns.  Just one or the other works wonderfully, too, if you want a more vegetarian or meat-lovers option.  Or play around!  You really can put anything in a bun and it’s delicious.  Just make sure it’s freeze/thaw friendly, if you plan to freeze them for later.  Important tip: You need to over-season the mixture.  Season it like you normally would, and then add a bit more until you’re just starting to wrinkle your nose from it tasting too strong.  The bread will even this out!  If it’s not over-seasoned, though, the bread will dull the flavor until it’s boring.

3 beets, 2 turnips, 4 baby red potatoes, 1 onion, 1 lb of brussel sprouts, all diced small.  Whatever spices you want, though I used rosemary, sage, garlic powder, salt, and pepper, tossed with olive oil.  Cover in tin foil, bake at 400F for an hour, stirring at least once in the middle.

After your insides and dough are ready, put a bunch of flour on the counter, and have some ready for dusting in a bowl. 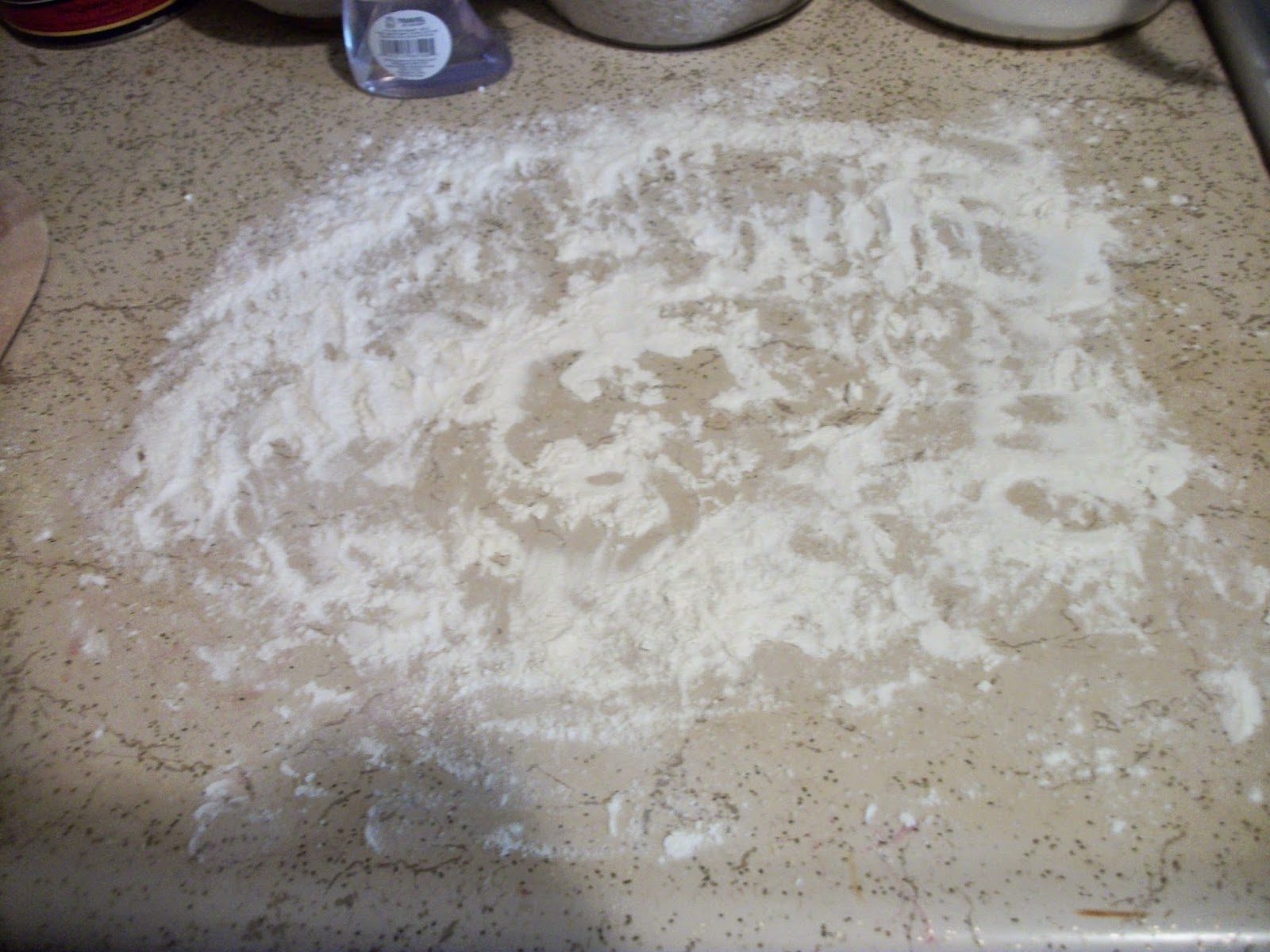 Remove about a tennis-ball sized lump of bread dough, and stretch it out flat.  I do this by gripping the edges in the air and rotating it, letting gravity do a lot of the pulling (kind of like stretching a pizza crust).  Place the stretched dough on the floured counter. 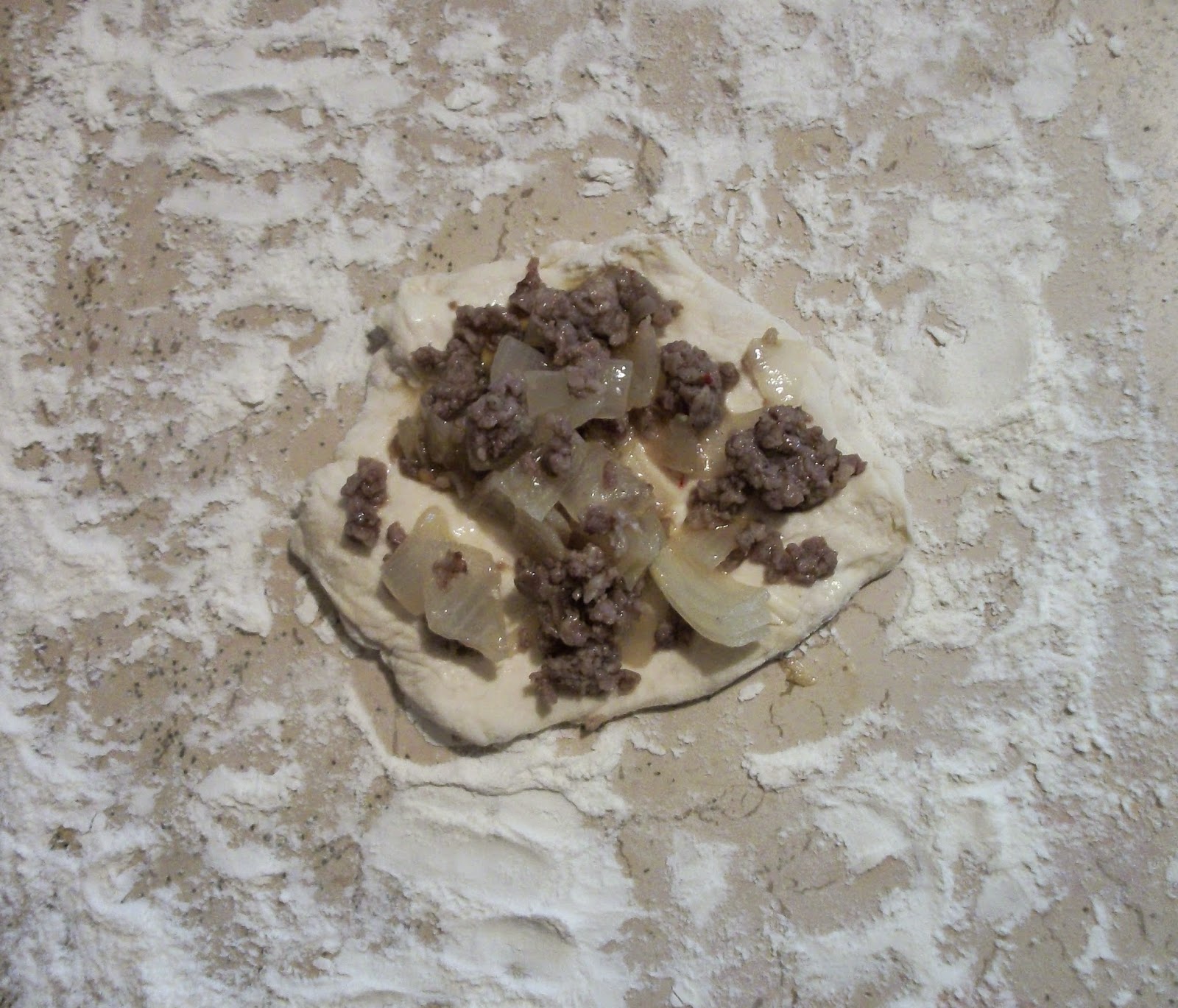 Add a fair heaping of insides (sausage and onions pictured here) – more than in the above picture!  The dough will stretch around it.  Stretch the edges up, pinching them together to encapsulate the insides. 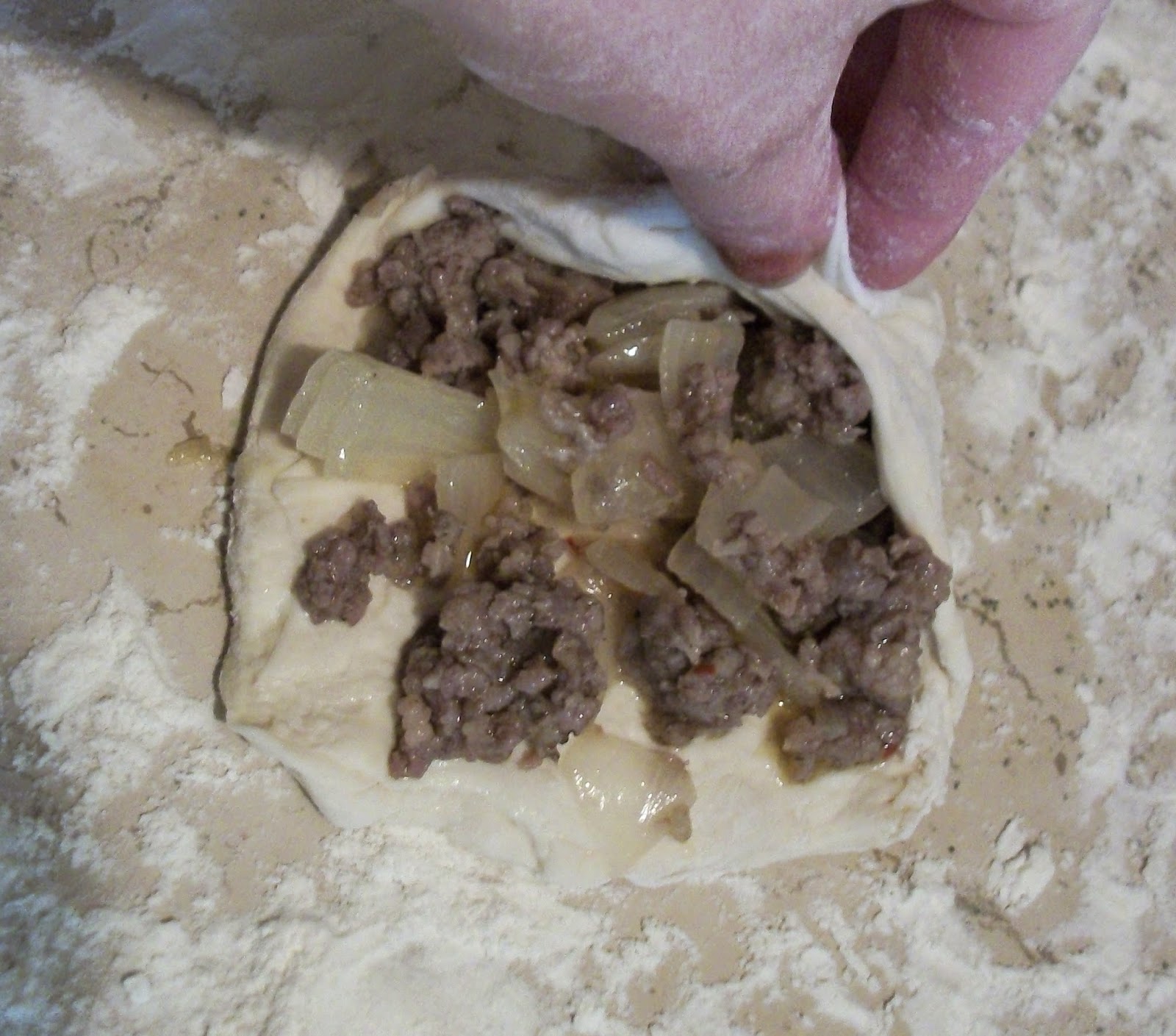 Turn it over and let it rest on a cornmeal-covered pizza peel, letting it rise again (~30 minutes, or whatever your dough recipe calls for) before baking. 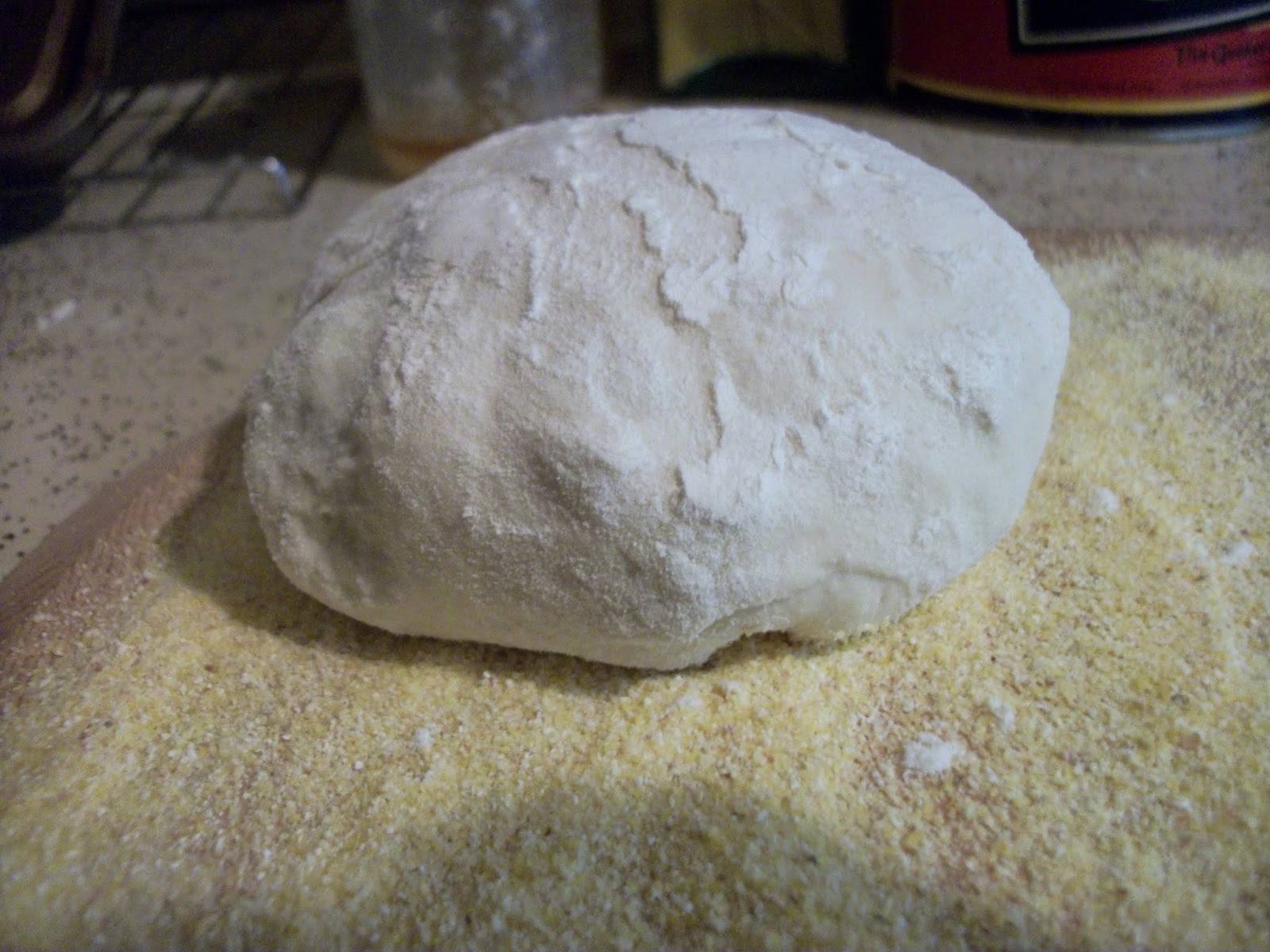 Cover your baking stones with tin foil before cooking these!  Juices will flow out of the buns as they cook, and you’ll spend a lot of time scraping at your baking stone to remove them if you don’t cover them in tin foil.  My baking stones have some dark areas on them now, from making this mistake the first time.  They still work just fine, but they were a pain to clean. 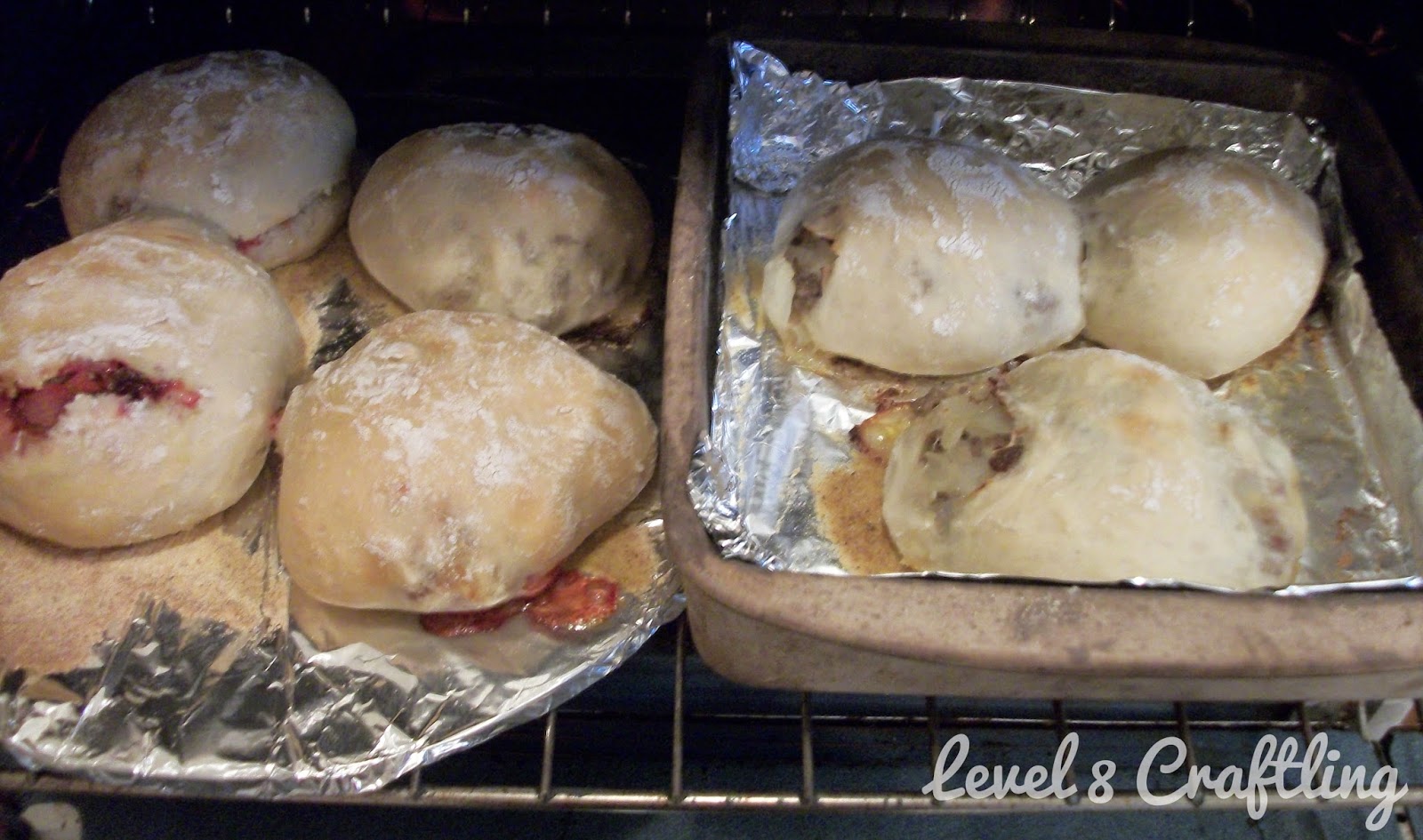 Salivate as you wait for them to cool.  Yum yum yum… 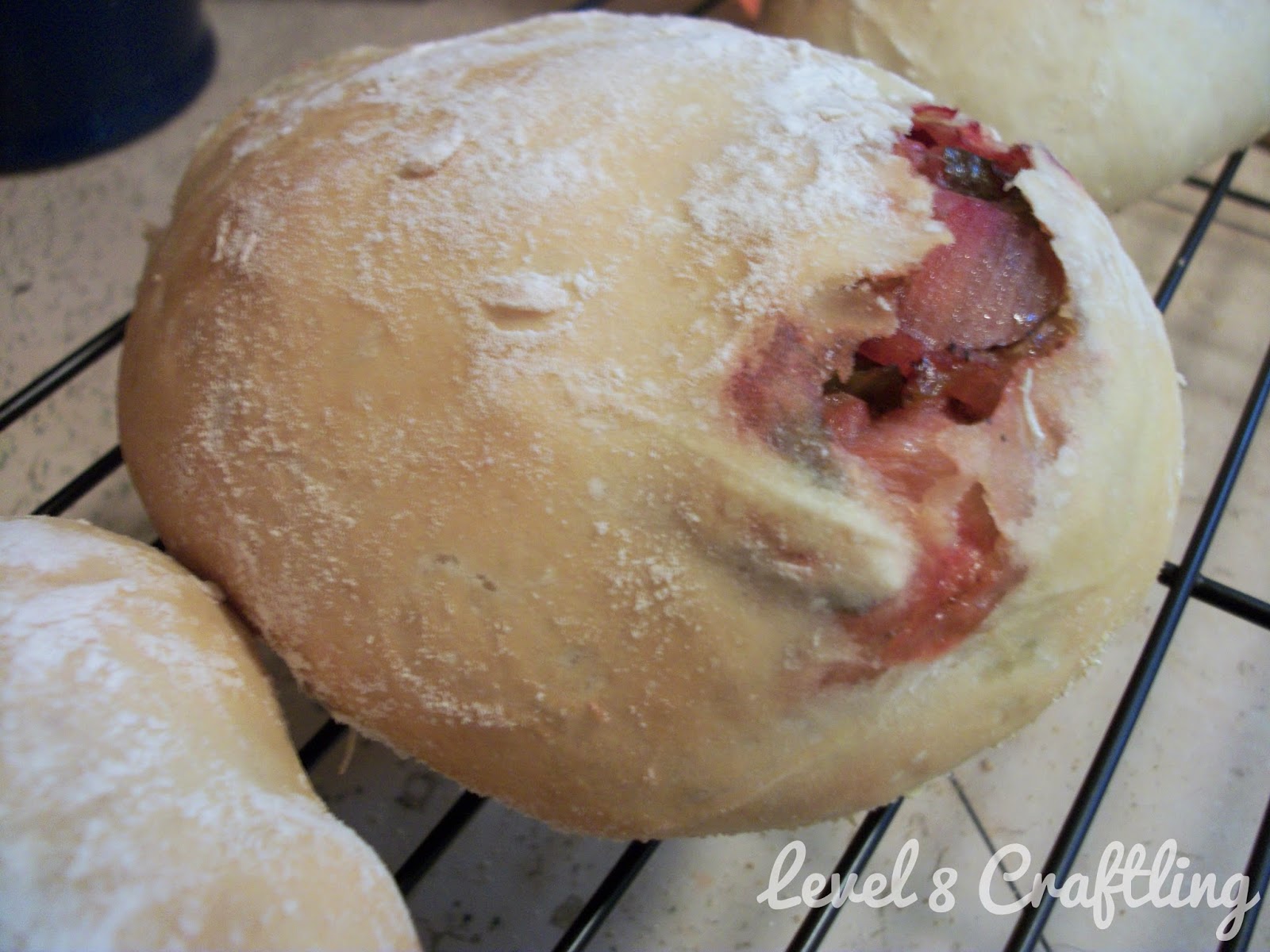 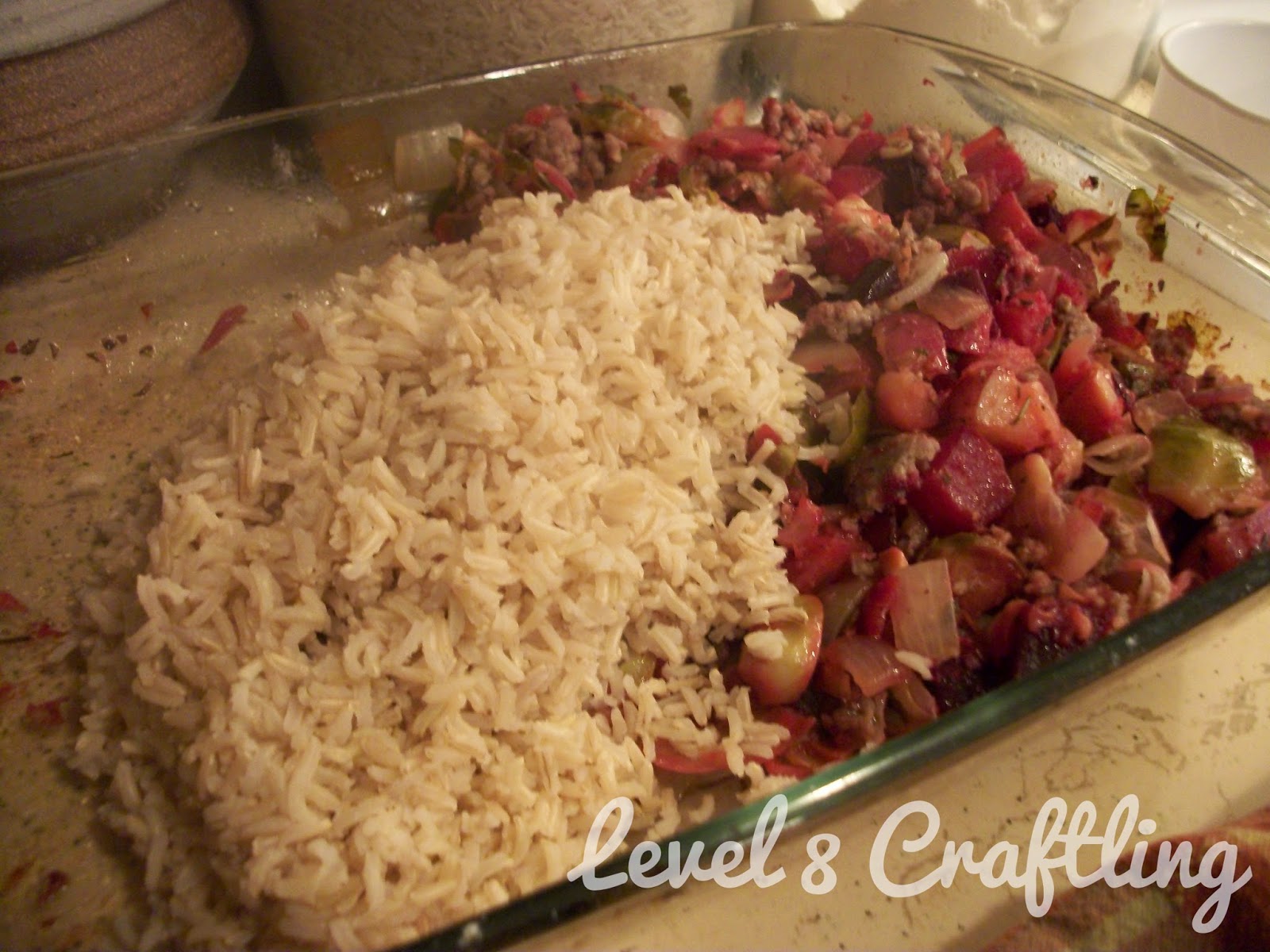 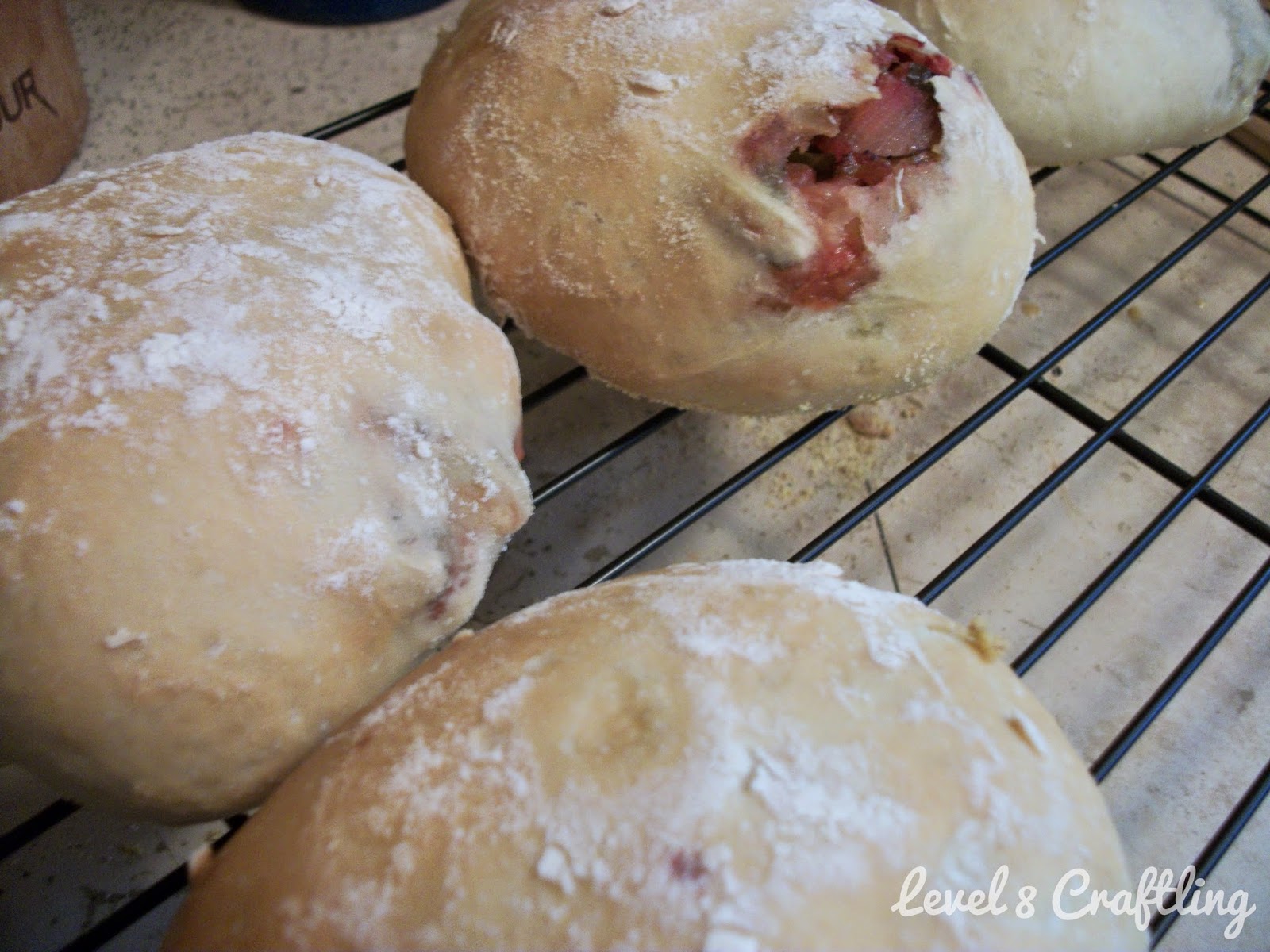 Enjoy your amazing SCA/convention/traveling food!  Make everyone else jealous.  🙂  ~Kell