In this post, I’m going to talk about a couple fun rapier melee games you can try with your fencers! Previously, I have talked a lot about the game Fox & Hound. This post explains King of the Throne and Bowser’s Castle.

King of the Throne

Materials/Set-Up: One large-ish field. One hay bale (the “throne”), set in the center of the field. One stopwatch.

Resurrection: Yes – a rez line or rez point at the back edge of each side of the field.

Death From Behind: Yes.

Time: About 15 minutes per run.

Scenario/Rules: At several unspecified time checks in a 15 minute battle, the side who possesses the throne at that time gets a point. The marshal running the battle sets the mystery time points ahead of time, so that only they know when the important times are. In order to possess the throne, one fencer must be sitting on the hay bale, with their butt on the bale and their feet on the ground. (Emphasize both butt and feet placement for safety.) The winning side has the most points at the end of the battle.

This scenario can be run several times, with chats between each run, so that fencers can learn how best to take and defend an objective. This melee game teaches that the objective is not always to kill your opponents: the first fencer who reaches that hay bale should plant their butt down as quickly as they can. It might be the split second difference between winning a time check and not winning one, even if they die immediately. Learning how to defend places without any edges is also an important skill (one I know I need to improve upon), and also how to attack said defenses. Anyone have any initial comments on how this is best done?

Optimal Number of Fencers: At least 4 fencers and 2 marshals. Probably fun with up to about 20 fencers.

Materials/Set-Up: Lots of rope – two 100′ sections of cotton clothesline rope should make the pieces, if I remember correctly (one 100′ section was used up making the bridges, and I made the circles a long time ago. Perhaps more is needed.). Perhaps several colors of duct tape (see future variations for why). A medium amount of space – probably about half a basketball court would work. See pictures and explanations below for setup.

Death From Behind: Absolutely not. That could get dangerous in this scenario.

Time: One hour is probably enough for a smaller number of fencers (~6-8). Two hours is enough for more fencers (up to 20), along with more time for discussions about tactics and ideas.

Scenario/Rules: The main concept of the Bowser’s Castle tourney is that there is an odd geometry of circles and connecting bridges laid out on the ground, and the rest of the ground is lava. The name comes from the many similar battles in Mario video games, where there is an odd assortment of stone pathways to fight on surrounded by lava on all sides, with no (or little) explanation for how you arrived in this strange setup.

There are no walls in this game, just pathways, so you can fence over the lines. If you step on a rope, though, you’re dead! It is recommended that there be two active marshals during this scenario, to keep a lookout for people stepping on the lines.

Here’s a picture of it laid out on the ground at this past weekend’s Summer Revel. 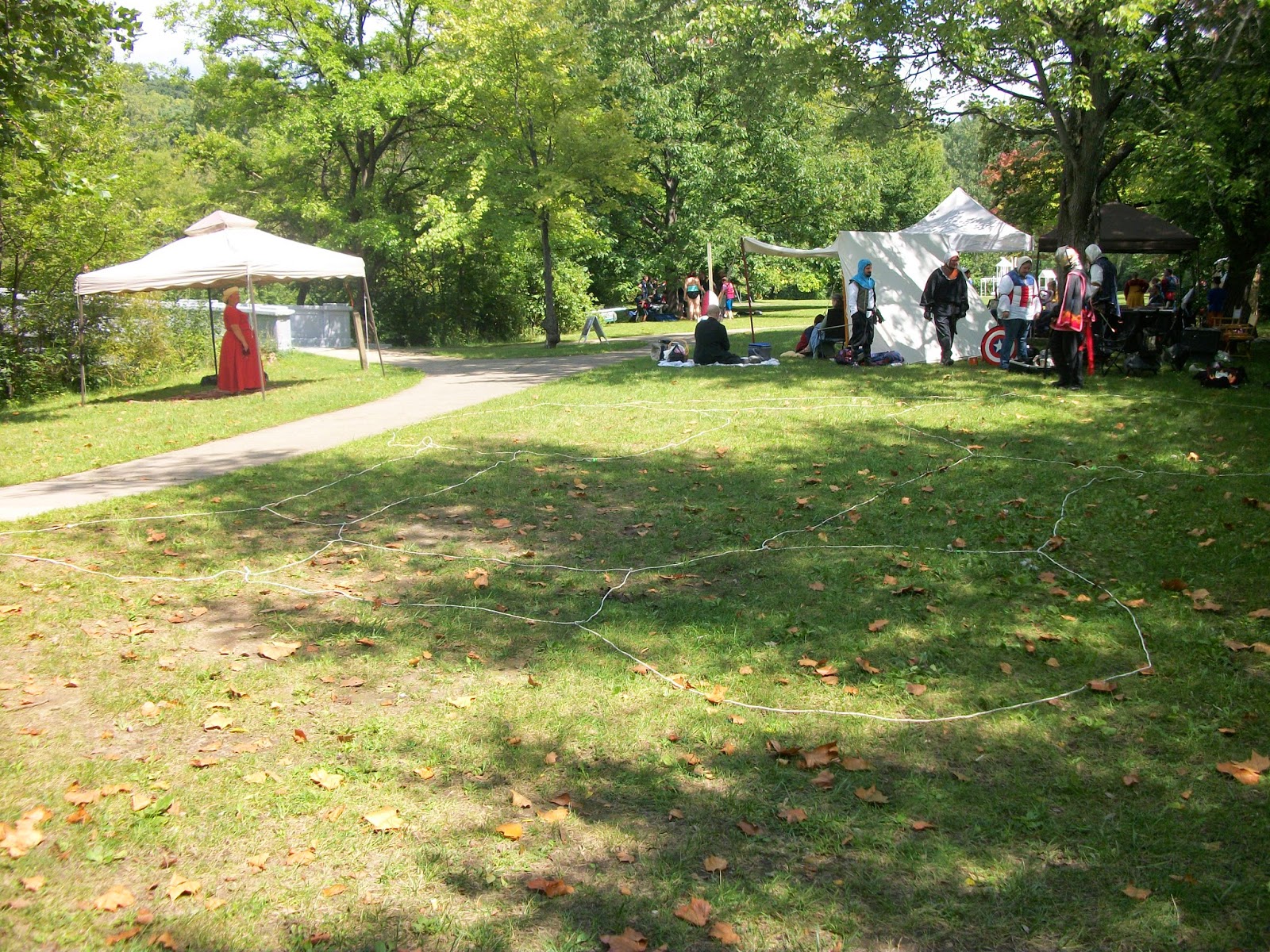 Whats this “Level 8 Craftling” thing?  The former name of Birch and Briar!

Since that might be hard to see, I outlined it with yellow lines in the photo below. You can fight 1 vs 1 in this – which we tried – but the real fun started when we made it a 2 vs 2 melee game. Each fighter starts within one of the circles, not knowing who is on whose team until the marshal calls it out just before lay-on. Then you try and be the last team alive! If your team wins, you get a point (regardless if you were alive at the end or not). 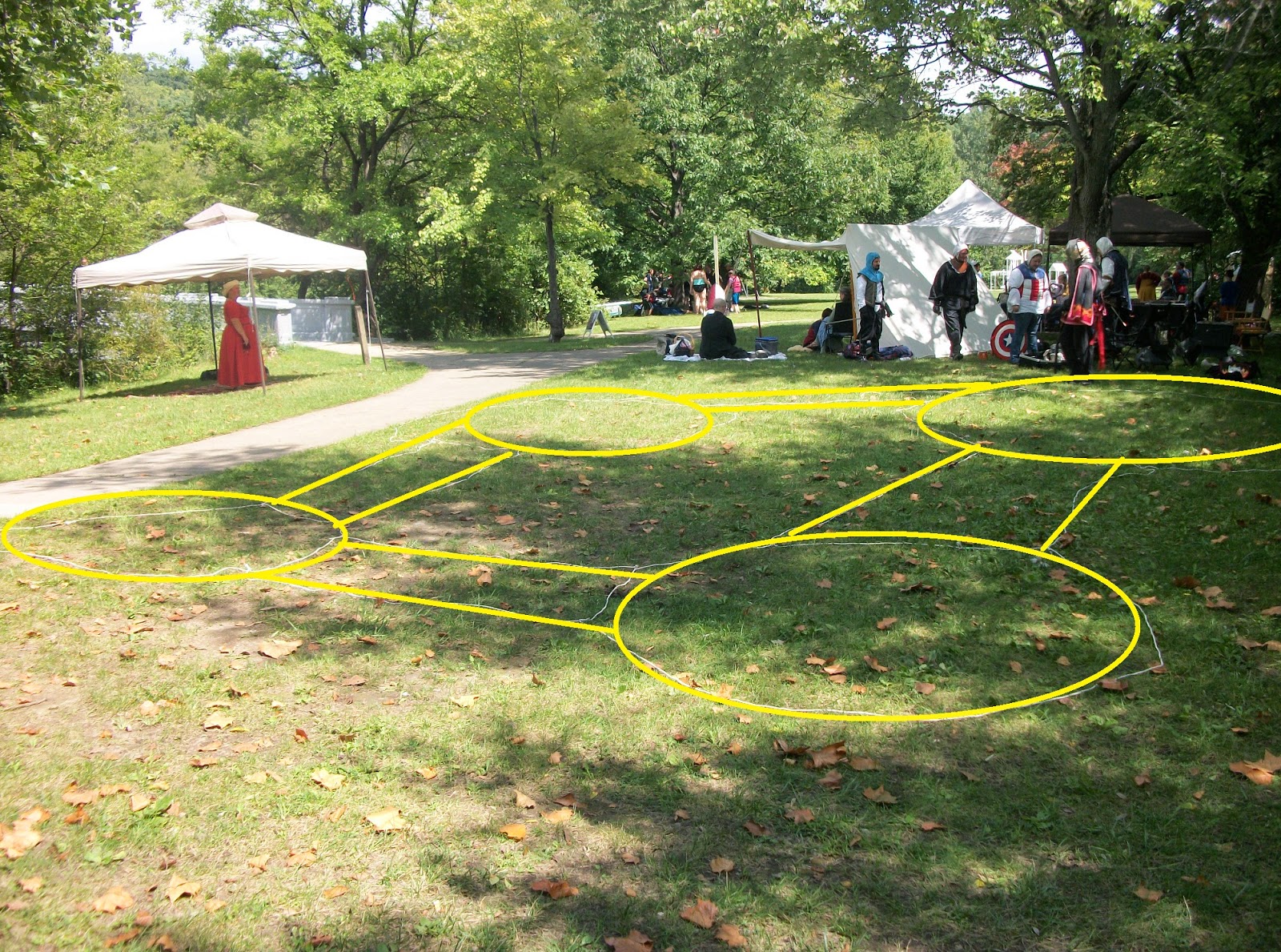 Here is a fencer walking across the largest of the circles, to give you an idea of the size. The smallest circle (bottom left) is tiny. All of the circles and bridges are different sizes, which forces you to make different tactical decisions based on where you are. 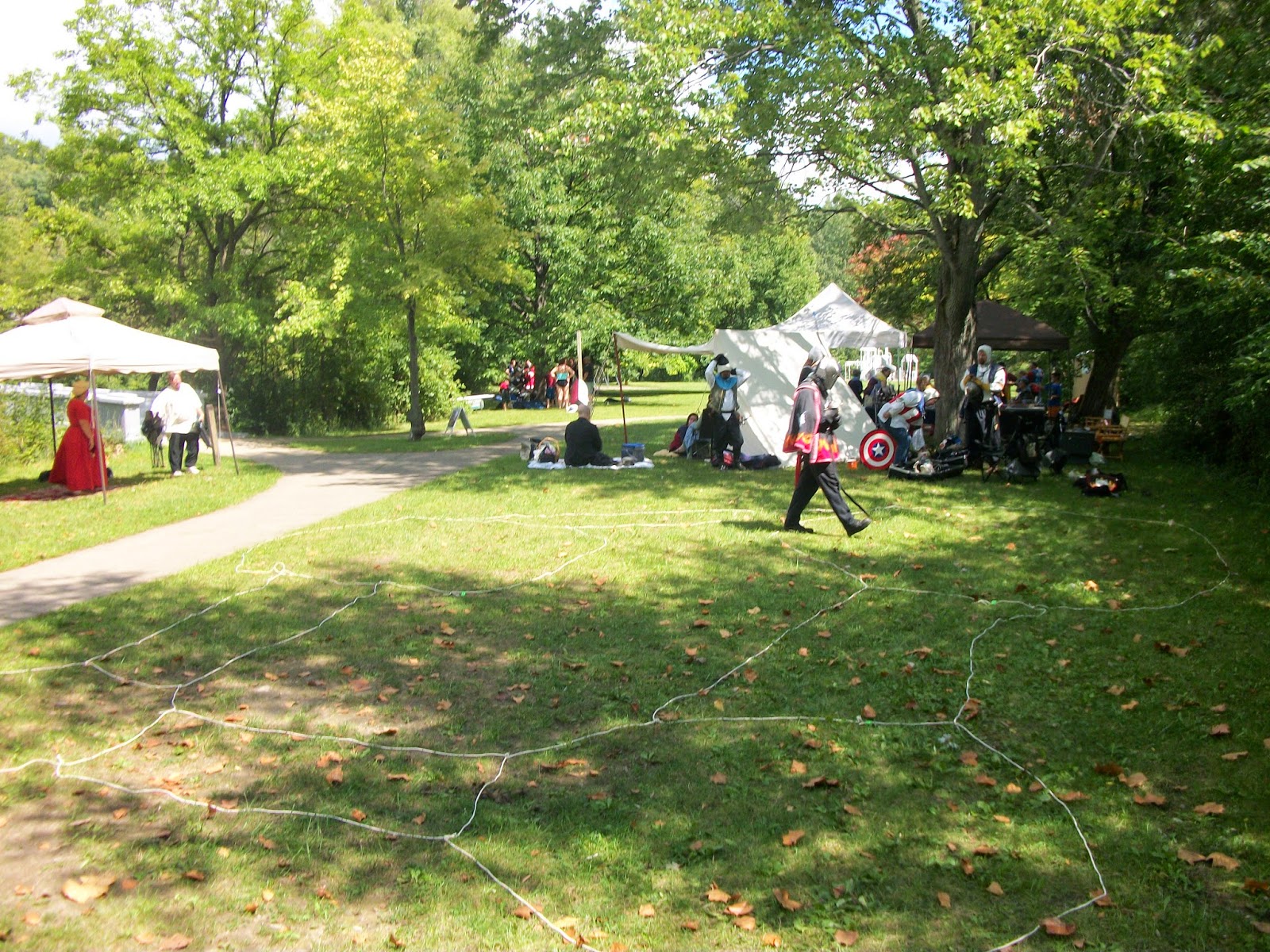 This was the first time I have run a tourney of this nature, and I’ve never seen anything like it before. Before it started, I joked that this trial run was to see if the game was fun, a train wreck, or both! Surprisingly, it turned out to be magnificently fun and educational, and not a train wreck at all. Here are some of my thoughts that came out of the first run of this tourney:

The MIC needs to figure out a way to make sure that each fencer is getting an equal number of overall fights, so that the points are fair. This could change depending on the number of fencers fighting. If there are enough fencers, a waiting line could make sure that people get roughly the same amount of fights. If there are fewer fencers, perhaps keeping a tally of how many times each person has fought is better.

The biggest bridge – on the right side of the picture – is the perfect width for a 2 vs 2 line fight, with two fencers on the bridge and two fencers in the big circle. I’ve never before managed a 2 vs 2 line fight. I will probably be designing a bridge tourney of this size to practice line fighting with small numbers of fighters soon. I actually made my first successful cross-shot during this!

The tactics change wildly based on whether you start with your teammate in the circle next to you, or your teammate in the circle across from you. One of the biggest things to emerge from this game for me is the need to make instant snap decisions and go with them – you often don’t have the time to consult with your teammates. You only have a few seconds between when the marshal assigns the teams and then calls lay-on. The team that wins tends to be one that makes the quickest decisions and yells out orders immediately, and follows them immediately. These are very important skills to hone. There are many scenarios on a battlefield when the quickest decision and execution wins (just think of what happens when a hold is lifted).

This is a great exercise in battlefield awareness. If you have a fencer who is having issues with consistently being pushed into the side of a listfield (who doesn’t appear to sense where the edge of the world is), this is a great tourney to throw them in to. It makes people practice awareness of their surroundings without being forced into a plank setting, which adds a lot of other constraints to fighters.

Future Variations: The fencers in this tourney loved it, and immediately started coming up with fun variations on this tourney. Here are some of our initial thoughts:

So many ideas! I’m excited to run more tourneys like this. I love designing tourneys that force people to think a lot and exercise skills that normally would need a lot more fencers to achieve. This is fantastic, and I will be running some of these variations in the future.

Order of the Cavendish Knot