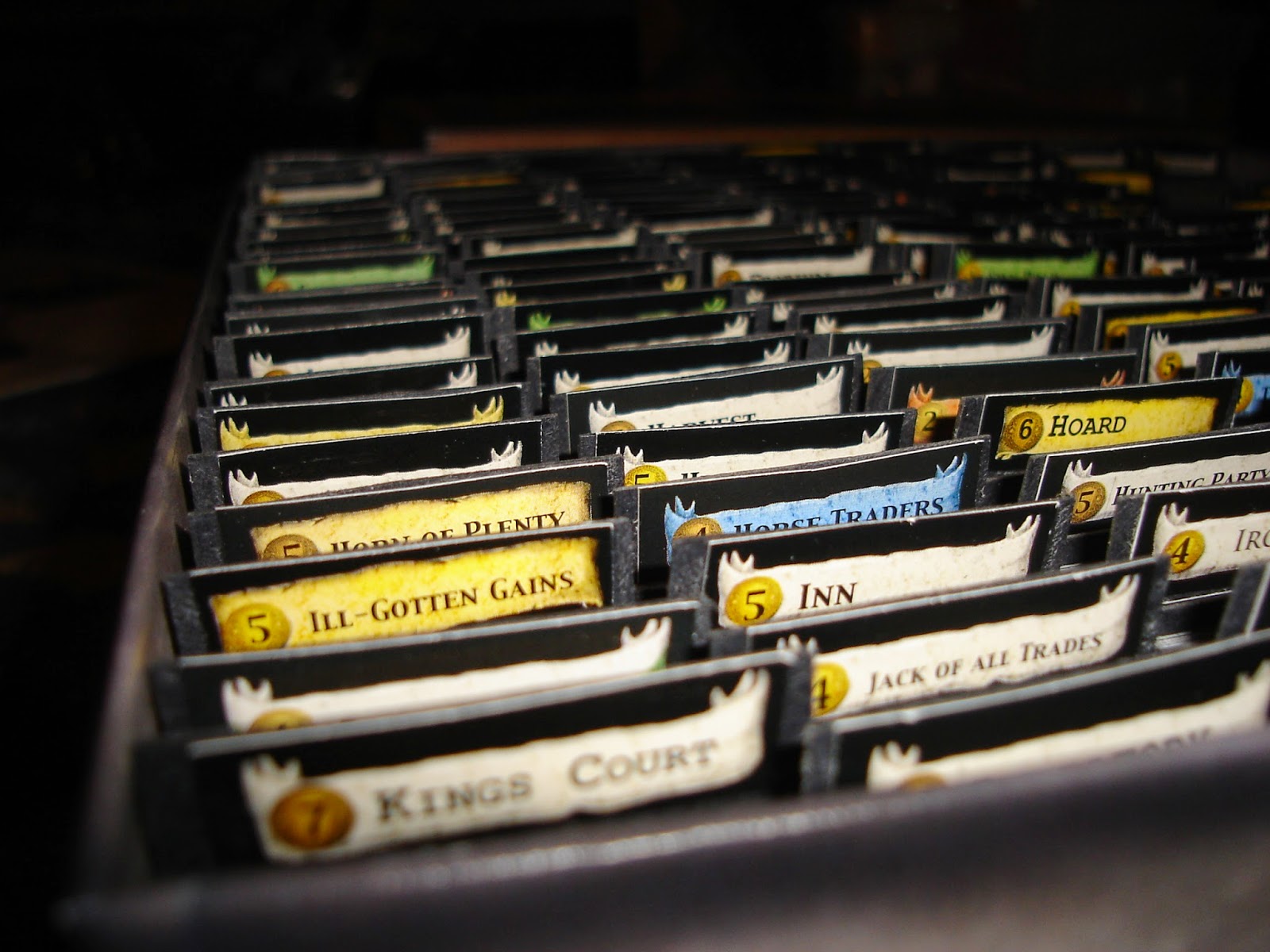 Like most people who adore the game Dominion, I’ve struggled a bit with storage solutions.  When I was making my first Dominion storage solution (~2.5 years ago now), I remembered to take a bunch of pictures, but never posted them.  Since I’m making a new storage solution now, I figured this was a good time to finally post about the old one.  It’s fairly easy to make and has held up really well.  Obviously I think it has its drawbacks, or I wouldn’t be designing a new case, but if you want a really cheap storage solution that doesn’t need any fancy equipment to make, this is a good one. 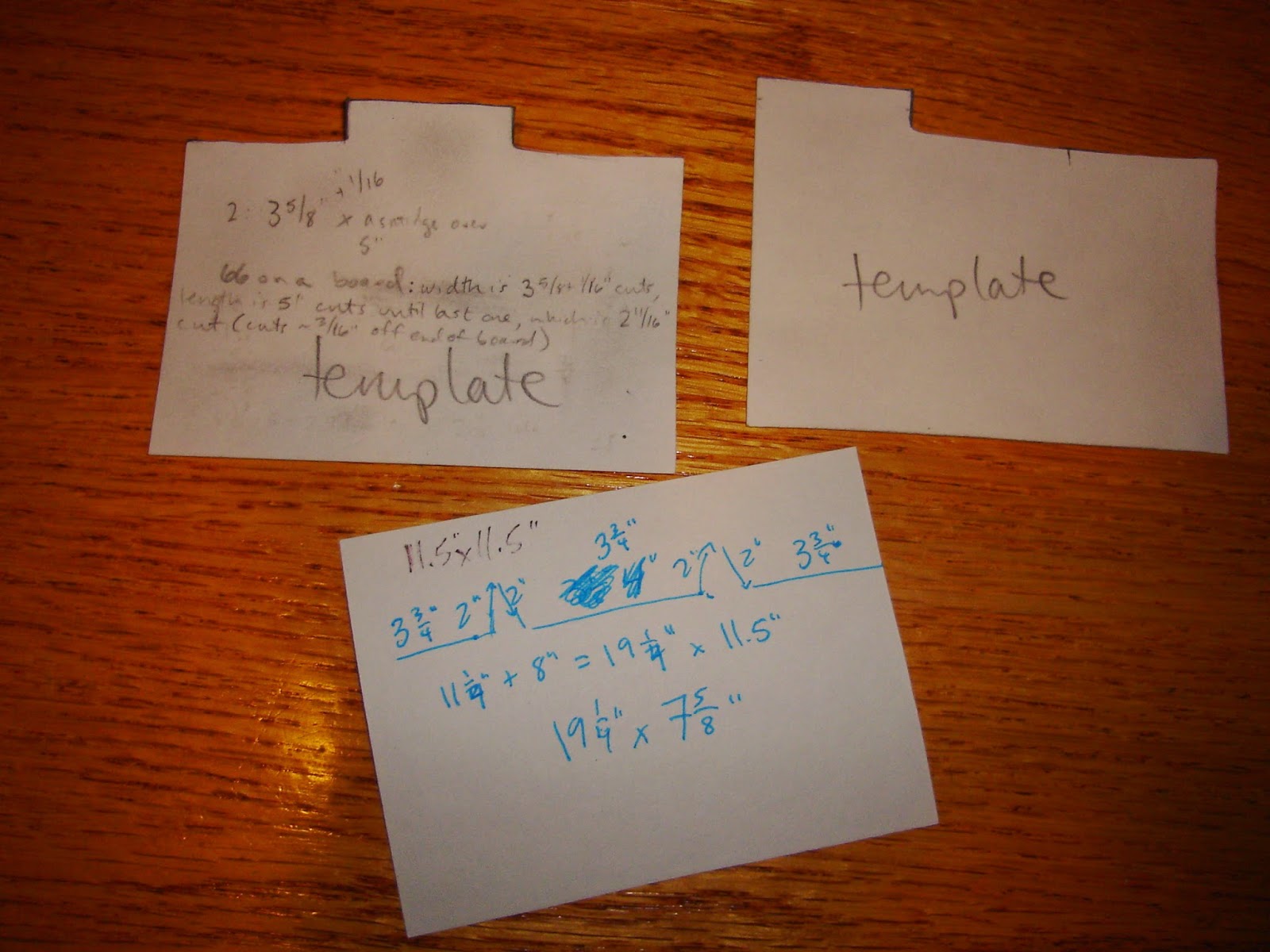 My old storage solution uses a series of tabbed dividers, like most of the other storage solutions out there.  I made my template to be able to fit the cards underneath them, lying sideways.  The two different template pieces fit together (fitting the top tabs next to each other like jigsaw pieces) to be 3 5/8″ wide and a little over 5″ tall.  The bottom card has the my jotted notes about the box insert, which you’ll see later in the post. 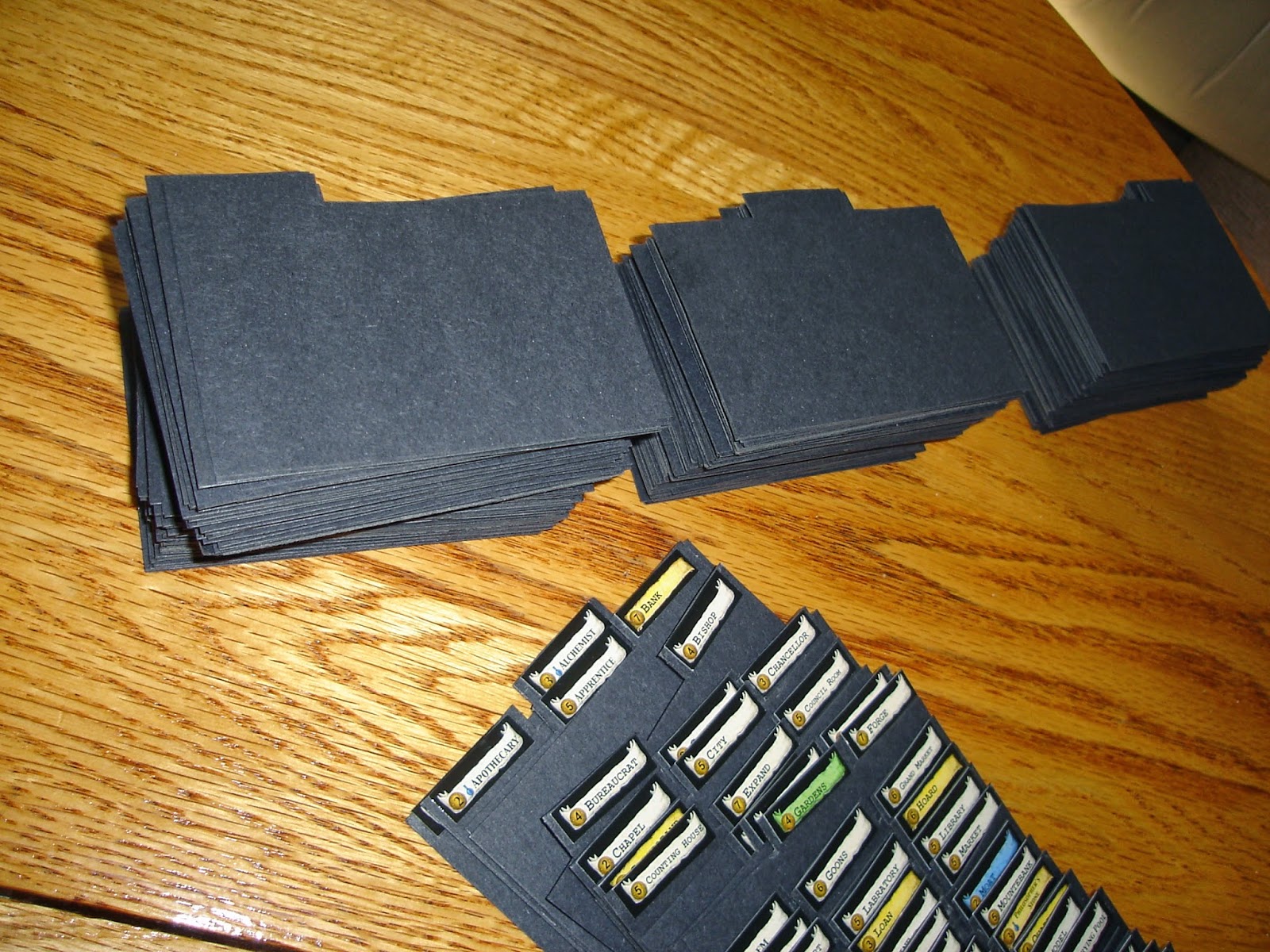 The templates are cut out of very stiff posterboard.  I found black stiff posterboard at Meijer that worked really well.  I cut out twice as many of the edge tabs as I did the center tabs, because there are two different edges. 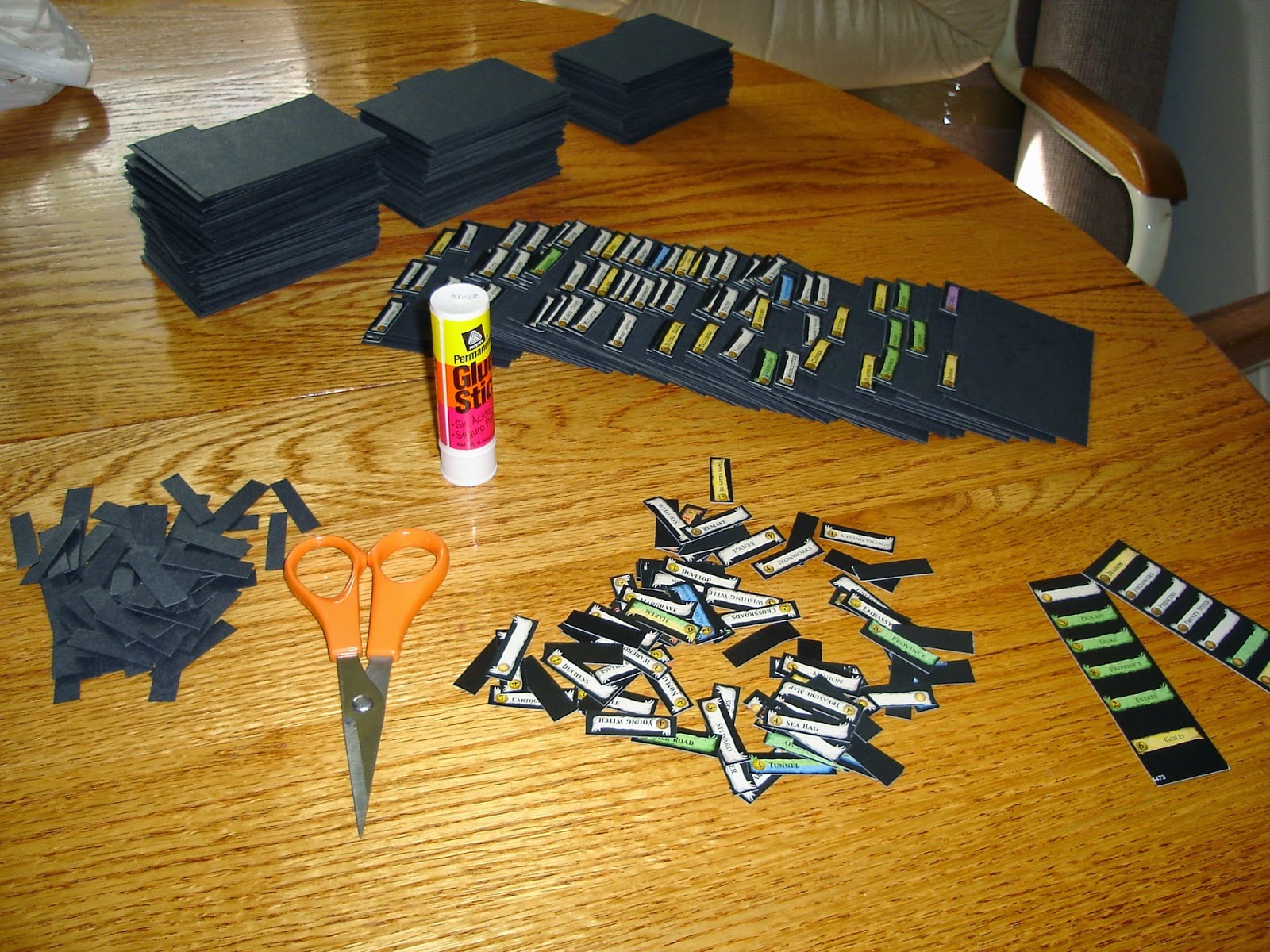 I got the names by cutting up the inserts that come with all the games, and gluing them to the tabs with a glue stick.  Super easy to do, though it took some time. 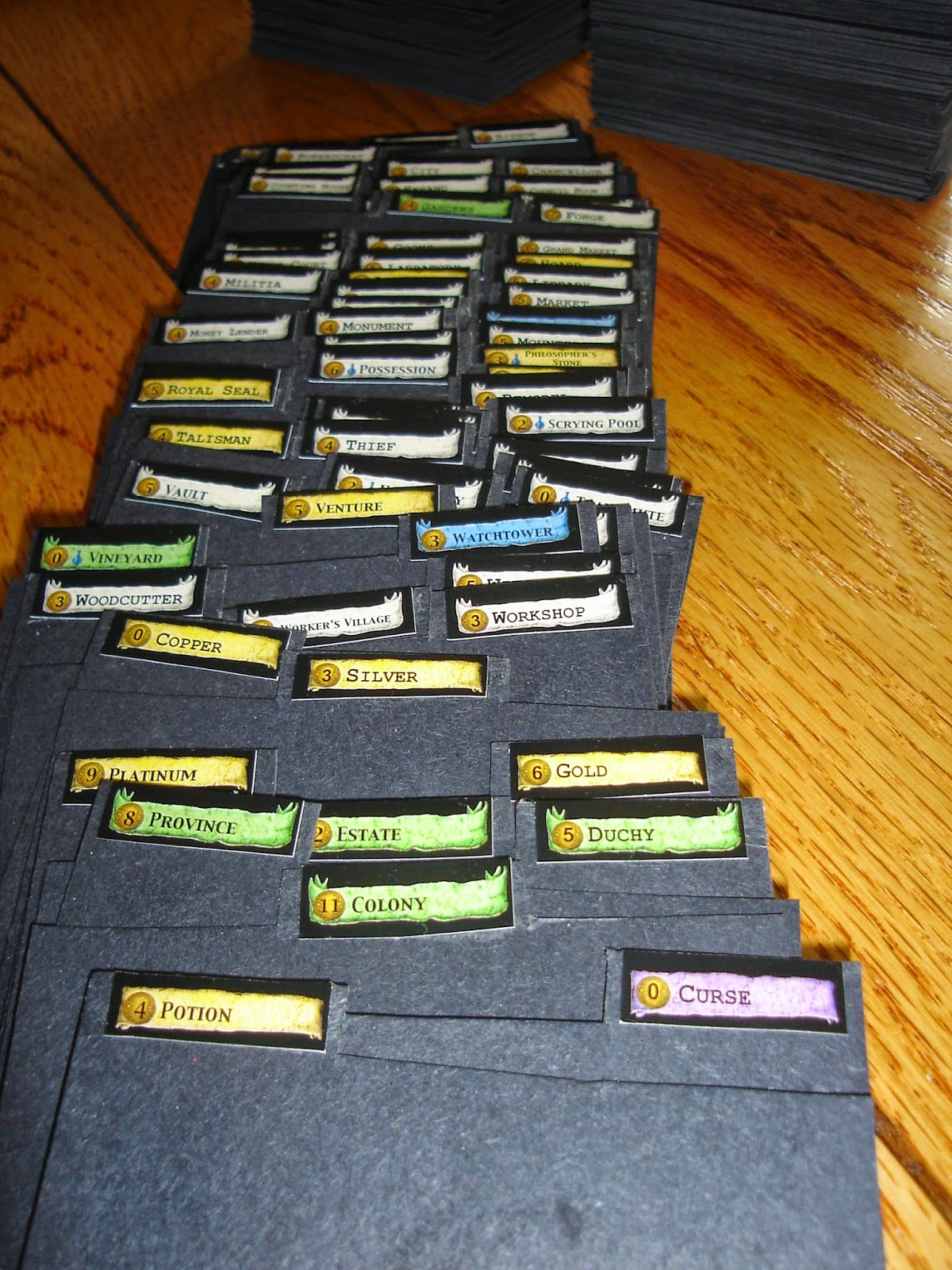 Then I made the box inserts from the same stiff posterboard.  I measured out channels that were wide enough to fit the dividers, then 2″ and 2″ again (to go up and down between the cards), then the dividers distance again, 2″ and 2″ again, etc.  The exact dimensions of the channels were made to fit the width of the box I was using to fit them in.  My first solution used two Dominion boxes (one small, like Alchemy, and one large, like the original game).  So I divided the width of the box by 3 to make the channel width. 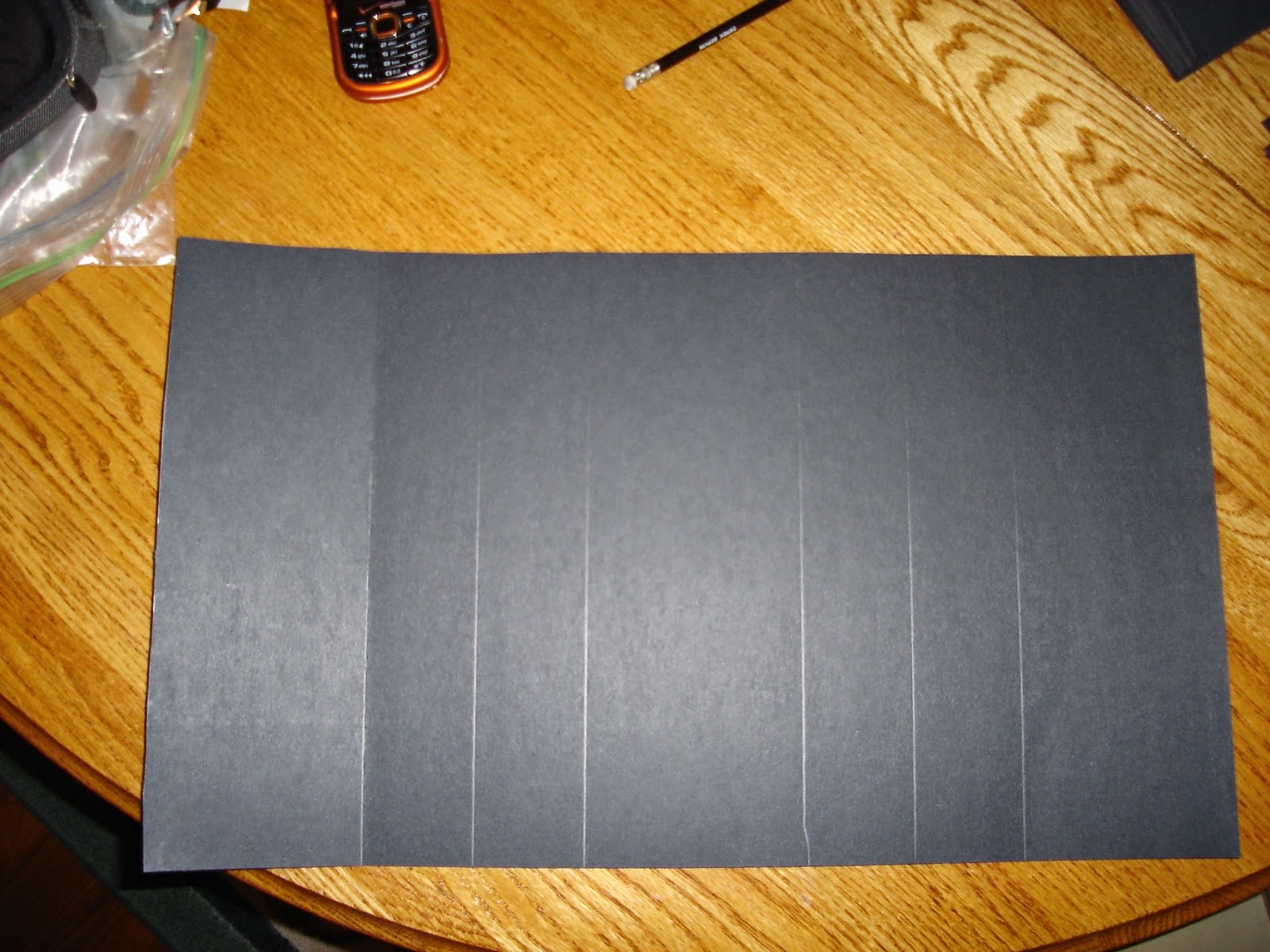 Here is one of the inserts folded. 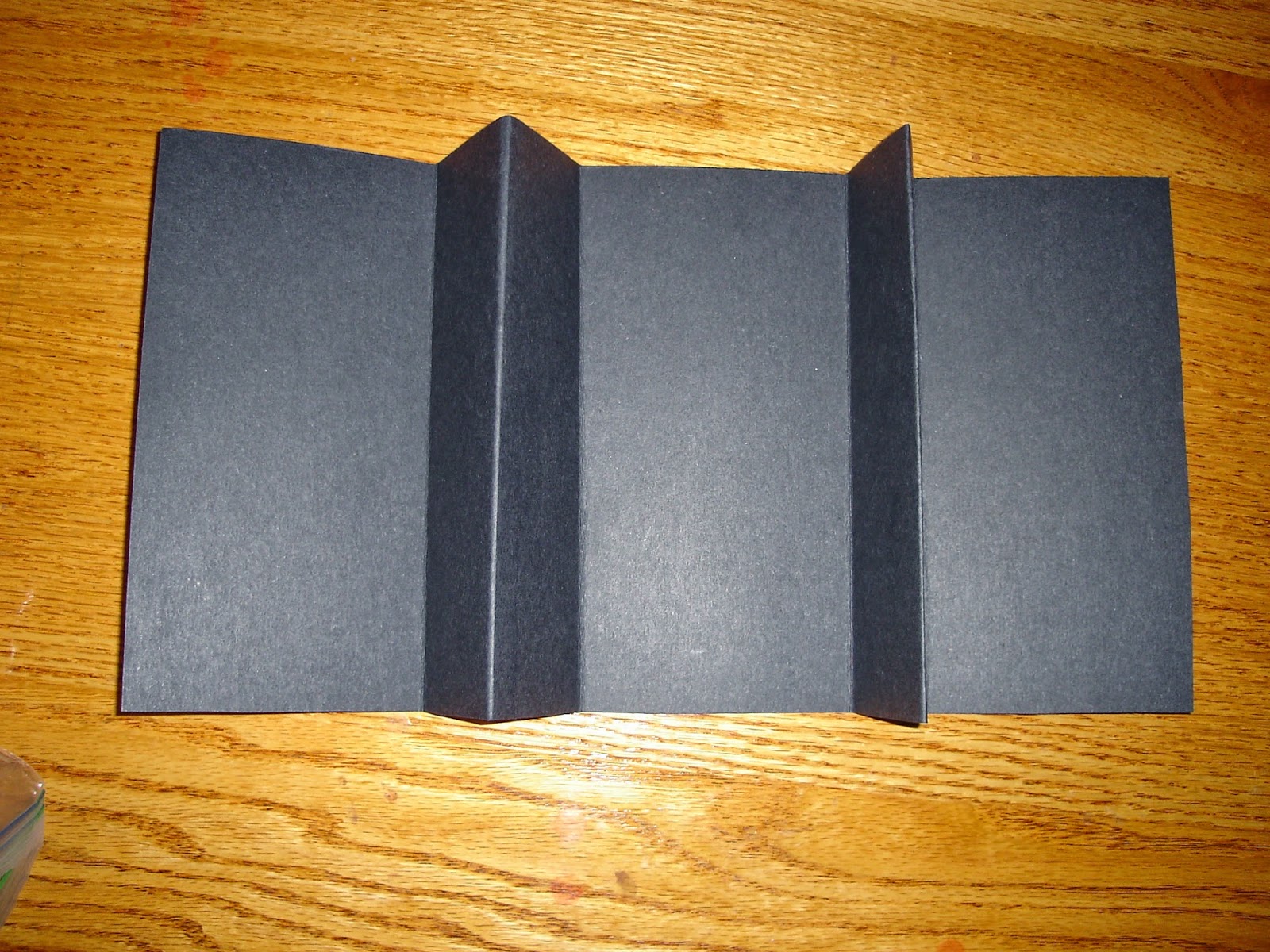 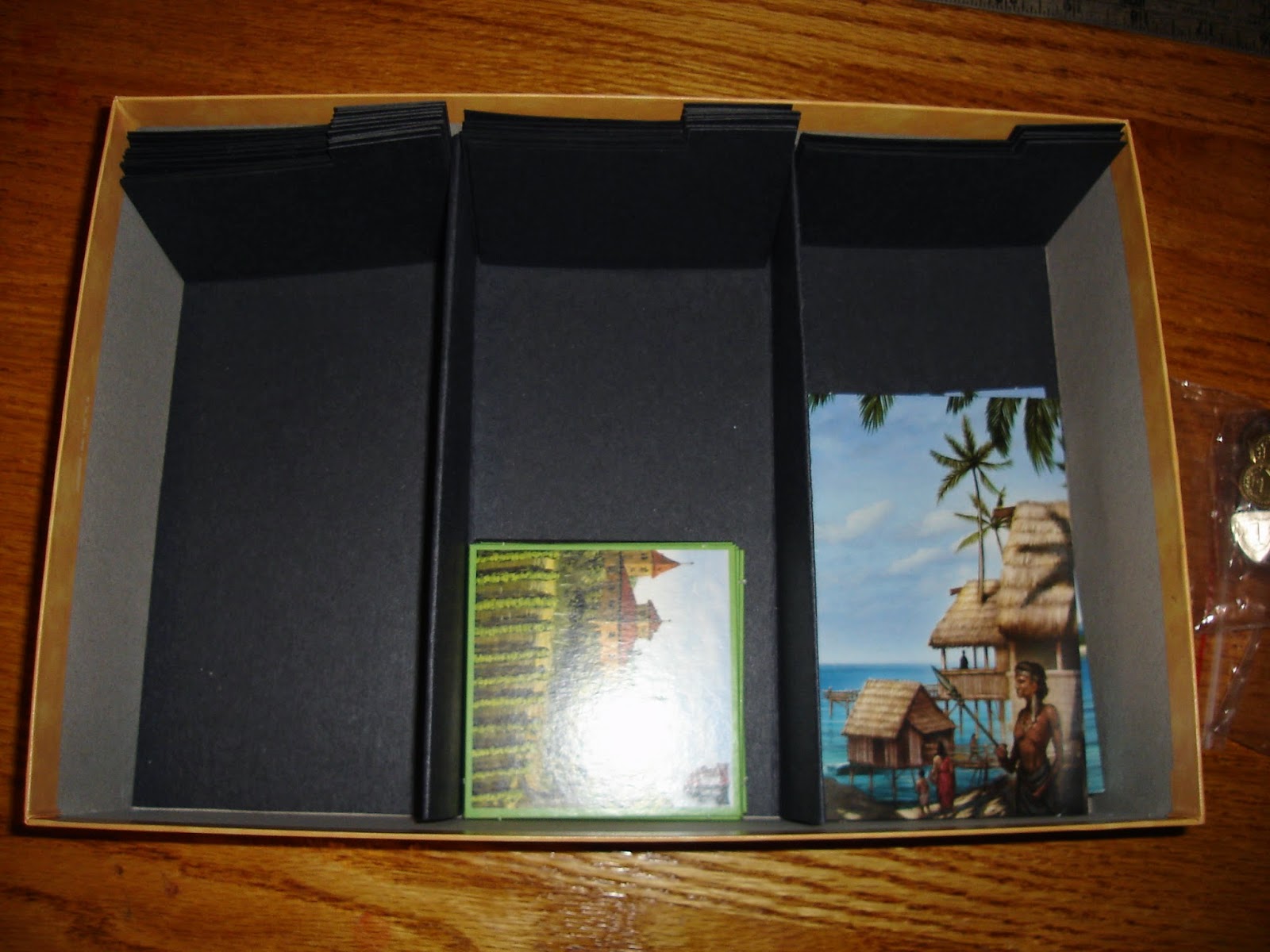 Here’s a lot of the cards in a box.  This picture may be from before all of the expansions were out – the cards did not fit into one box once they were all out. 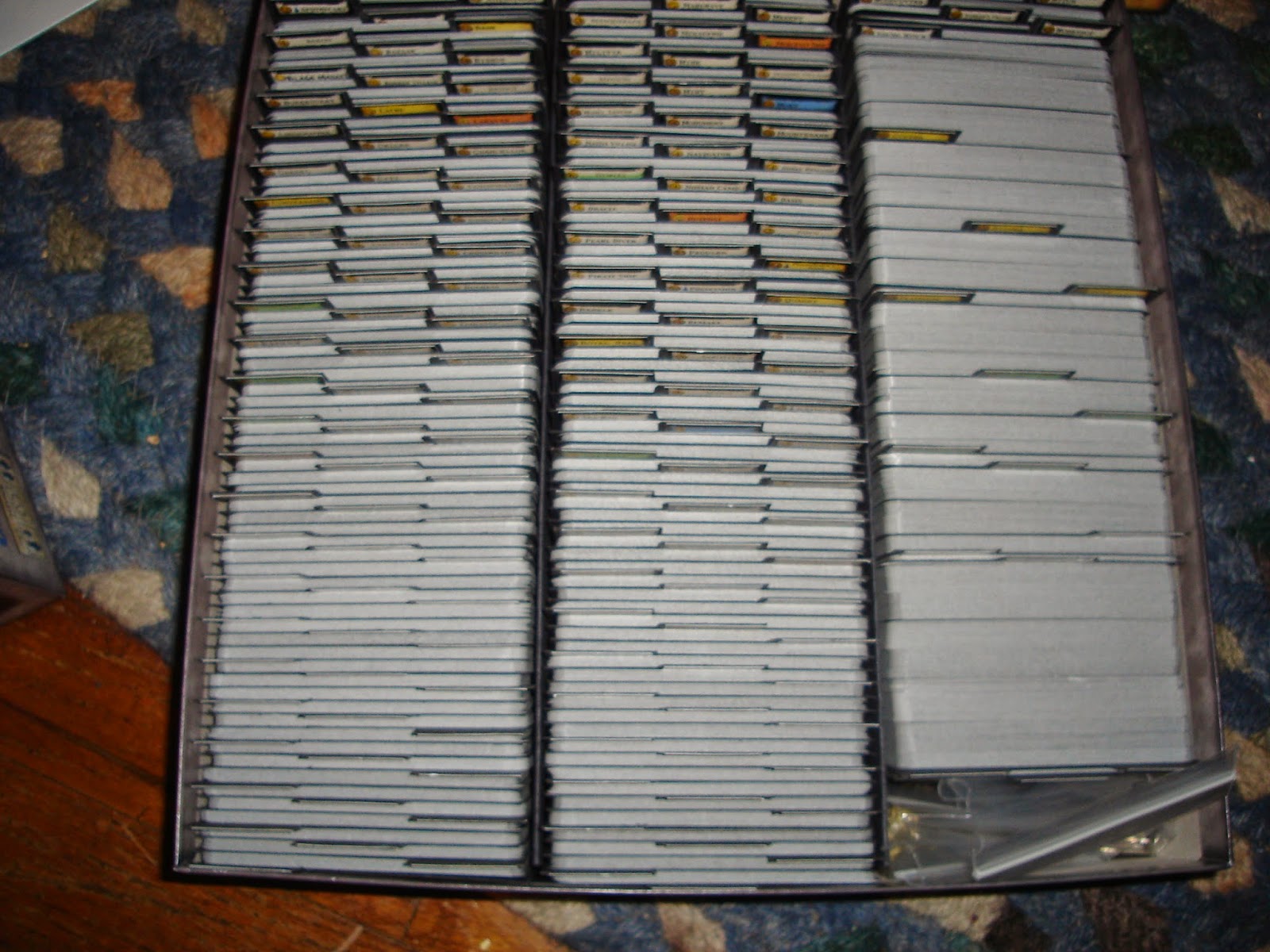 Now, I also made one more upgrade to this, about two years ago.  The overall system was the same, but I found an awesome rigid camera case (one of those big silver ones) at a garage sale for $5.  That camera case had enough space for four long channels of cards, which fit ALL the cards in the same box.  It also had space for a small box for all my tokens, the mats, and a pocket for the rules.  Overall, it worked pretty darn well for me over the last two years.

One helpful tip:  If you have space in your case somewhere, keep a gluestick with the game.  I would occasionally need to re-glue one of the names onto the tabs as they came off periodically. 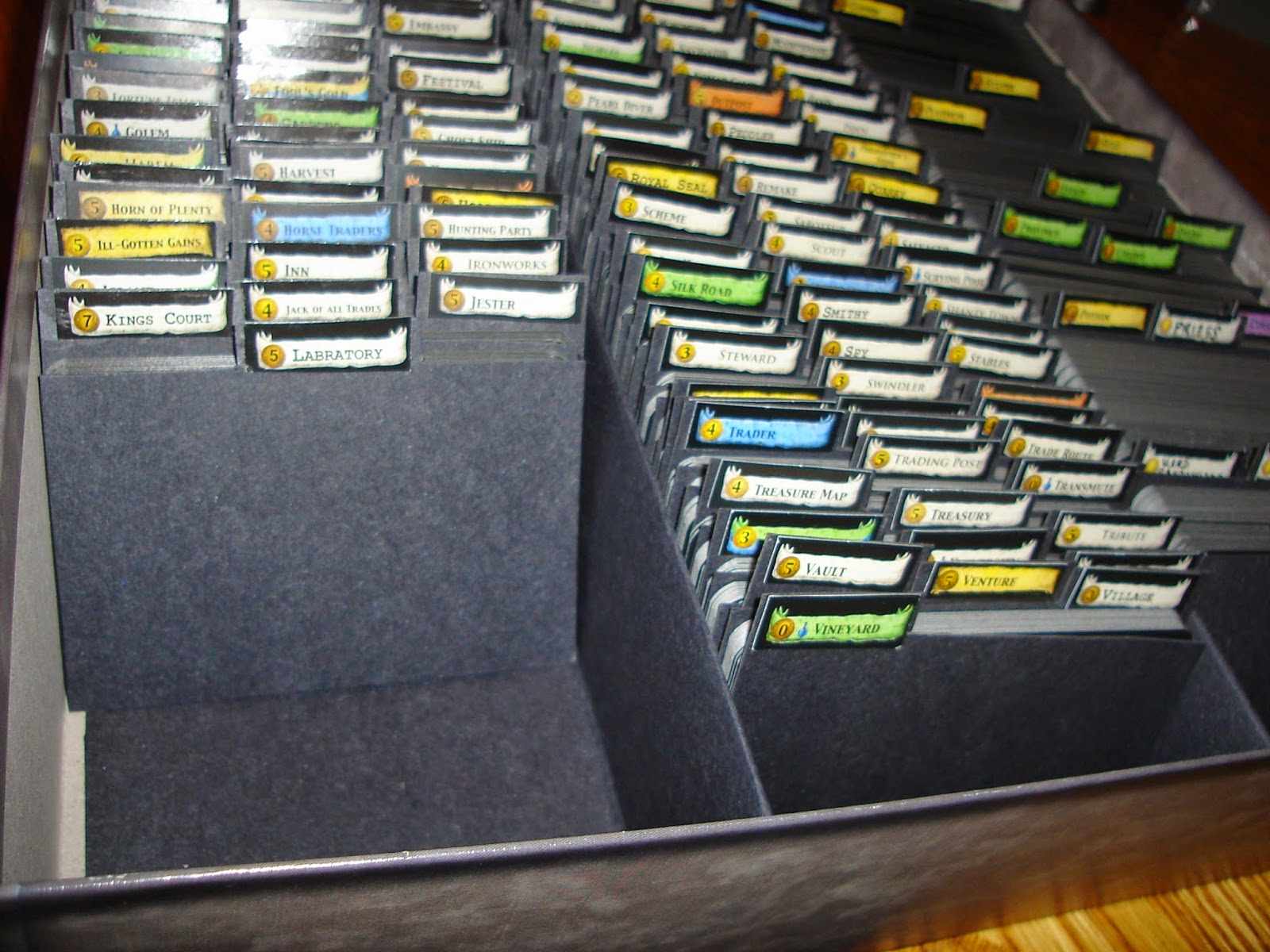 Here’s an updated peak on my new storage container!  This one involves fabric pockets for all cards, which are bound together using strong medieval bookbinding techniques.  🙂  Even though I’m not done with this one yet (right now the “Dominion Big Book” storage seen below is just living in the old camera case until I build the rest of it), I can already tell it’s so much easier to use!  Getting cards in and out of the game has never been so smooth.  Flipping the pages is quick, and one flip shows 32 new cards, instead of having to scan across 32 tabs.  And putting the cards back is such a breeze – just flip the pages until your eye spots a blank pocket, and pop the correct cards back in.  This is so much easier than flipping through all the tabs!

It’s also easier on the cards.  The dividers in the system above would sometimes shift, especially if I had forgotten to pack in the foam on top of the cards well (the camera case had a layer of foam that fit over the cards to hold them in place).  The cards at the back of the rows would occasionally get slightly bent, as they shifted up the side of the camera case.  Every once in a while the dividers would slip out of place if I tried to move the box too hurriedly when I was playing a game and there was empty space in the box (from the cards already out on the game table), and I’d have to go hunting underneath the other cards to find the dividers again.  These problems will never happen with this new system. 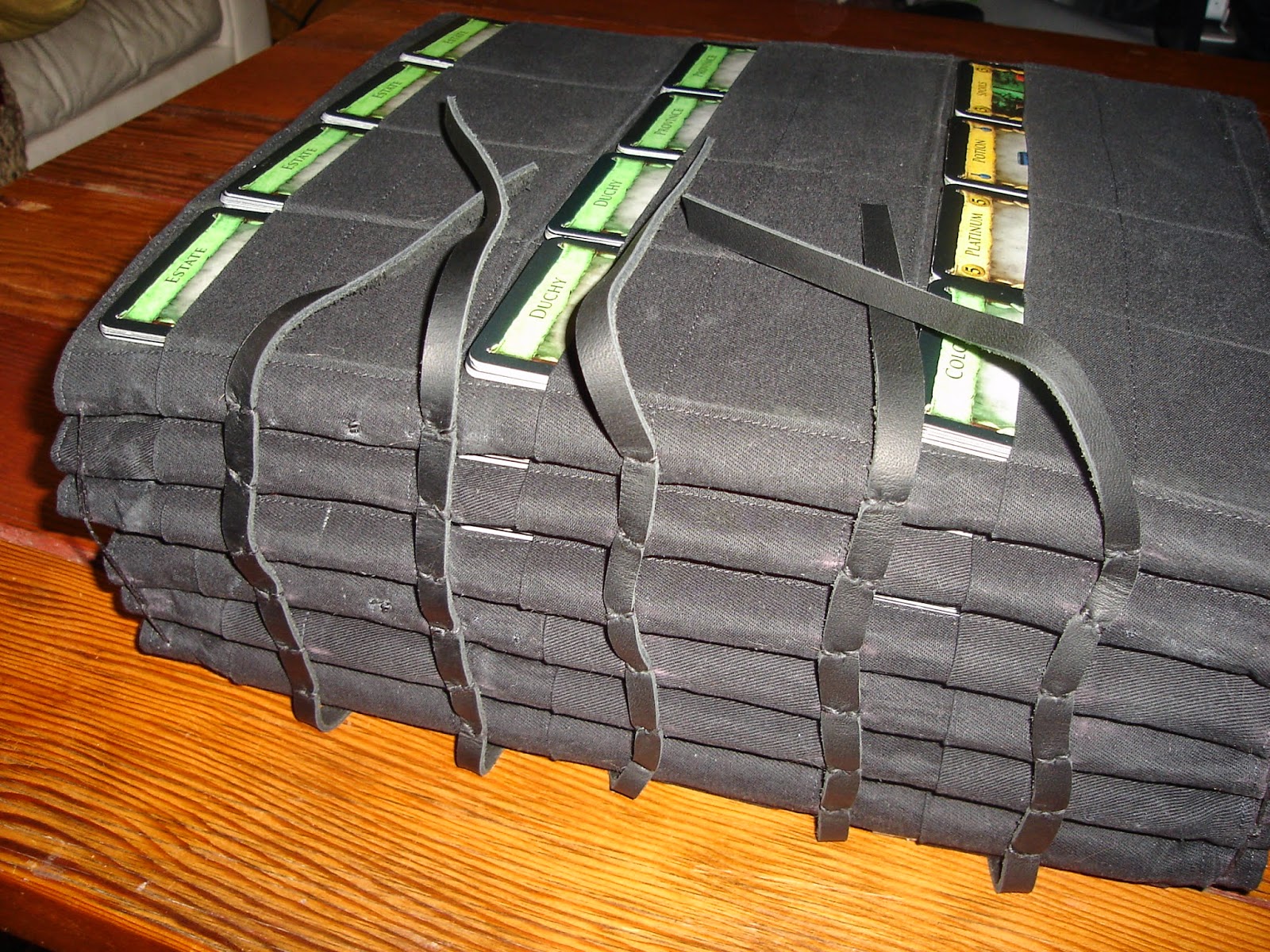 I am already so in love with this new storage system, and I still have to create half of it.  The current plan is to create a custom leather rigid box to hold the big treasures and randomizers (which don’t fit well into the small pockets), another little tiny box for all the tokens, and then figure out a great leather carrying case for it to protect the entire thing.  It will be exciting when I finish it, hopefully within the next few weeks!  ~Kell