So, I started playing Dungeons and Dragons a couple months ago. At first it was a little nerve-wracking – I kept thinking I would do something wrong. A couple months and lots of fun later, I no longer care if my gnome isn’t exactly “gnomey” enough. After the first couple sessions, I used this Character Lifepath Generator to generate some background information, which I am slowly using to make my character more of a real person. Mostly this post is to show you some cool pictures, though! Read the text if you’re interested in learning more about our adventures.

Above is some of my dice! I got 16 dice for $4 by digging through the loose dice bowl at Vault of Midnight, a local gaming store. I found an entire set of orange dice! Orange is awesome, and I like them even more because they are thrifted. 🙂 Below is my character sheet. I am a gnome cleric named Kak Smykw Dobrrtin. I am 3’9” tall, and have a “pet barbarian” named Grnr who is almost twice my height – Dave’s character (Grnr) is rather stupid (intelligence of 7!), and he listens to me and protects me from physical harm while I protect him from others who try to take advantage of him. I’m up to level 4 now! I get two level 2 spells and four level 1 spells a day, if I remember correctly. 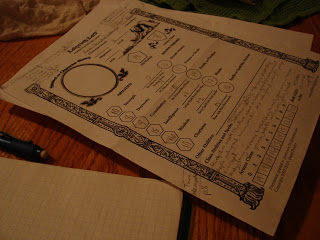 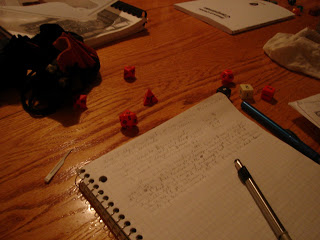 I take notes as we play, so I can remember what happened last when we meet up, as we only play once every week or two.

DeForest is our DM, or Dungeon Master, which means he has come up with the world and all the characters and plots in it that we will stumble upon. He has entire notebooks full of information, and has spent a lot of time making beautiful maps. 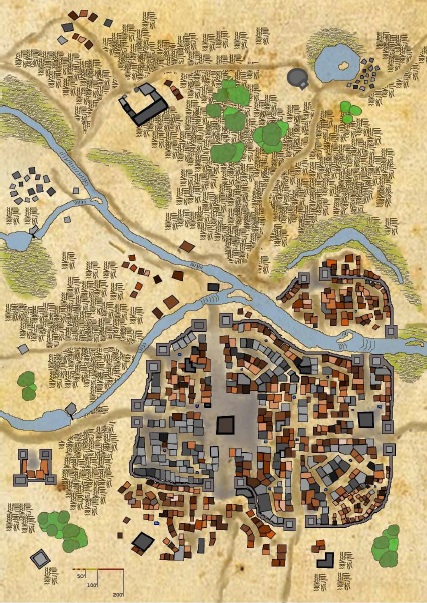 This is the map of Dantredun, one of the main big cities in our area, that DeForest spent many hours making! We haven’t reached Dantredun yet. 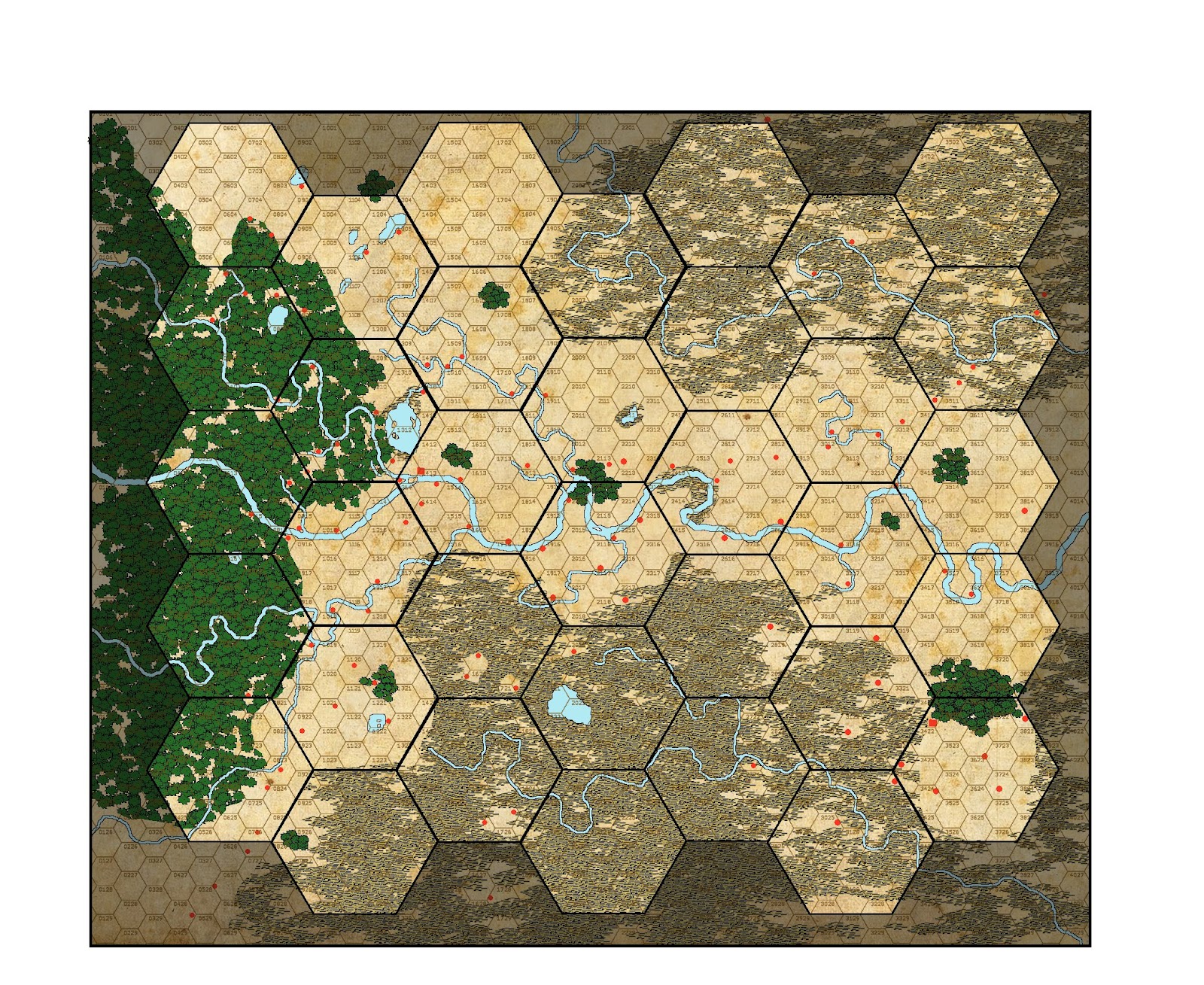 Map of our corner of Blackmoor, the country we’re in right now. DeForest made this, too. If I remember correctly, each large hex is 30 miles across.

The last picture is a close-up of the last fight we had. Five nasty undead creatures had been unleashed by an evil spell and are trying to kill us. We had killed the person who set us up to be sacrifices to this spell earlier in the day, but the spell creatures still caught up to us once dark fell. Since our fights often involve a lot of players, we use dice and various items to represent people and things so we can follow what is going on.

Our party is backed up against a rock bluff, represented by the two pens. The big green d30 (30-sided die) is our wagon. I am perched on top of the wagon (the little yellow d6). I am small and easily harmed, so I generally try to stay further away from the monsters and use a combination of spells and my slingshot to do damage to enemies and to help my teammates. Sometimes I kick ass with my slingshot, and other times I fail. I was made of major fail during this fight, as the enemies all had really good armor (so I basically couldn’t hit them unless I made AMAZING dice rolls, which I didn’t), and all but one Cure Light Wounds spell had been drained earlier in the day, when we killed the caraven leader who was trying to get us killed. (During that fight, we happened to light on fire the one thing that could have protected us from these evil creatures… oops. At least our enemies couldn’t use them now, either…) So I mostly sat on top of the wagon and was useless, haha.

There were five bad guys, who thankfully only came at us one at a time (apparently they were skittish bad guys). Grnr (Dave’s barbarian), Pike, the half-orc with the caravan who warned us we were becoming spell fodder (he’s a NPC – non-player character), and Andeli, another NPC nominally on our side, are out front battling the monsters. Brown and Plaid are two other NPCs, who had great names that DeForest painstakingly chose, only to have us dub them Brown and Plaid based on descriptions of their clothes, haha. I have no idea what their original names are. They are also fighting the bad guys – wait, no, Plaid still is but Brown had been so badly injured that he crawled underneath the wagon (which is why the wagon is perched on top of his die in that wonderful oh-so-stable tower). Wytt is Kelly’s half-elf character (another Kelly, not me), and she’s shooting her bow at the enemies. The caravan’s former slaves are holding torches – you can see safety pins on the table, which indicate to us where our torchlight reaches (bad guys beyond there are not attacking us). Bad guy #2 is behind the wagon, and had landed on one of our three horses and was ripping it to shreds as the drovers (NPCs) tried to hold the other horses and not be eaten by the undead monster. The number of pips on the dice show how many drovers there are (6 total).

Paul wasn’t able to make it this time we played, so his character, Noah, is “somewhere” in the fight, though he’s not actually in it officially, hence the “Noah?” off to the side. Noah is nicknamed “Saddle Man” by Grnr, as he carries a saddle around since he got robbed and his horse stolen (at least, that’s what we think happened – Grnr and I met Noah as he was walking along the same road we were on 9 in-game days ago, before we were hired by this evil caravan to be guards, and he was carrying a saddle then). Grnr, like I mentioned, is really stupid, so he generally uses descriptions as names – he still calls me “Short Man,” even though he’s known me for a long time. I’m not sure he knows I’m not male – I seem to just be a gnome and therefore “other” to him. Anyway, back to Noah – his saddle actually came in handy this day! After we escaped from the evil caravan, we managed to round up three of the scattered horses. Two of the horses were taken back by a couple drovers to get the wagon, and the other horse we put the saddle on so the former slave girls could take turns riding – they were not used to roughing it at all. Good thing Noah has consistently carried that saddle around. 🙂 And possible also a good thing that he wasn’t there, as I’m not sure his character would have let us use the saddle if he’d been around to actually protest, haha. (He’s a rather mysterious and untrusting thief.)

The fight ended when we managed to kill two of the evil creatures, and they got scared off. For all we know, though, they will be back to finish us off the next night, so we have to stay on guard. I have a lot of comrades to try and heal in the morning, when my spells recharge. Hopefully we live through the next fight…